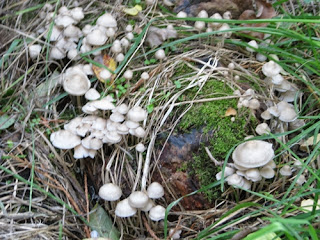 Because nothing says "random" like pictures of mushrooms.  They're in our yard.  They're helping to decompose old logs and stumps.  They're forming a fairy ring of sorts around the house.  It rains a lot here.  I keep expecting to see Smurfs in the yard. 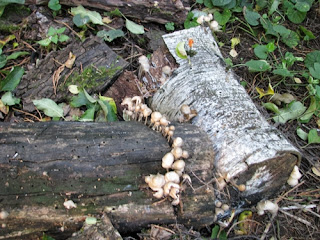 We went to the Portland Farmer's Market today, hoping to find Winesap or Arkansas Black apples, but it was a little too early.  So we bought Spitzenberg (Thomas Jefferson's favorite apple) and Belle de Boskoop and Gala and unpasteurized apple cider and pear cider, and Starkrimson pears and Asian pears. 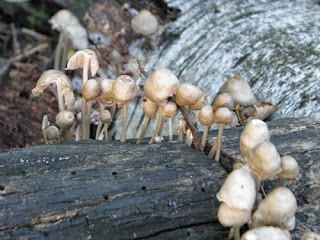 On the way back we had an almost front-row seat for a bridge lift, which was kind of cool.  The girls and I were slightly late for the Zumba fundraiser at the Hazel Dell Grange for Down syndrome.  I had never done Zumba before.  It is a little like fast-paced aerobics with a salsa beat.  White Presbyterian girls don't wiggle their hips naturally, I've decided -- unless they have Down syndrome, because Tertia is a natural. 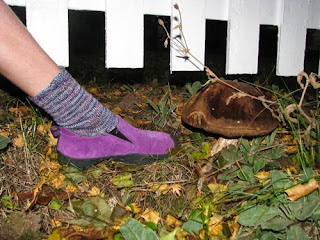 Steve dug around in the yard some and planted daffodil bulbs under the spruce tree.  In the process, he disturbed a few bumblebee nests, and one stung him on the finger.  Bumblebee stings apparently aren't as bad as other kinds of stings, but they do make your finger swell a bit.  I gave him some Benadryl. 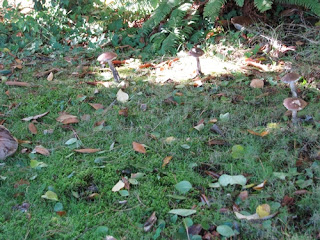 This week, Steve made me watch the Monty Python "Silly Walks" skit, because I displayed my ignorance about a poster that Daniel has on his dorm wall.  I could really have lived my entire life quite happily without seeing that.
Posted by Kathy at 7:53 PM

If he gets stung again in a short time, it may be much worse! My son was bitten for the second time in two weeks. His whole body swelled, turned bright red, and there were large rash spots on his legs, back and shoulders. He's an adult. If the double benadryl hadn't kicked in right away, we'd have been at the hospital, but then he wouldn't go. I'm worried about what happens if there's a third one. I would have liked to have that epi pen handy!

I can't believe you did go your whole life without seeing the silly walks before now! What about the cheese shop? And crunchy frog? =)