October is Down syndrome Awareness month.  Well, there are a lot of different issues competing for awareness each month, and Down syndrome is one of them this month.  Now, a big part of me wants to get sidetracked about why we should be more aware some months than others, and whether "awareness" is really all that helpful or just politically correct jargon.  But the truth is, there is a diminishing number of people who have Down syndrome in the world, and civilized people should be more aware than they are about some of the special concerns facing them, and should remember that awareness the rest of the year.  Sometimes a little thing, a kind action or a bit of effort to slow down and include someone, can make all the difference. 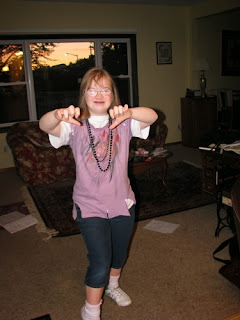 The world's cutest zombie, all ready for the "Thriller performance at her school.  There have been three performances of "Thriller" in the last week, actually; there was also Zumba last Saturday and the high school dance last night: 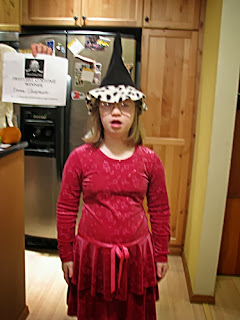 at which she was honored with the "prettiest costume" award.  It was a cool experience, and I got to see that Down syndrome/dancing stereotype in action, not just with her.  But she did say, yesterday evening, "That's enough Thriller."

(By the way, the Hermione hat came out pretty well for having been sewn together in 5 minutes yesterday afternoon.  The pieces were already cut out of polarfleece and were in that $5 Massive Bin of UFOs and Scraps from the Epic Estate Sale last summer).
Posted by Kathy at 6:42 PM

Email ThisBlogThis!Share to TwitterShare to FacebookShare to Pinterest
Labels: down syndrome