I'm still processing the astounding non-coincidence (because there is no such thing as coincidence) that I know Petra Anderson, the young woman in the Aurora shooting whose brain had a benign "defect" that channelled the bullet through without causing major damage.  I remember her as a little girl, as shown in the picture with her mother at the end of this post.  When I saw the first pictures of her as an adult, I was struck with the resemblance to her mother as I remember her; the same heart-shaped face, the same creative spark even in a still photo.  Her mother is now fighting terminal cancer, just as my late mother did.  I know the story has gone viral now, and the care fund started for their benefit is doing well.  I'm glad something positive and uplifting can come from this, but of course I'm so sorry to see the Anderson family having to go through such terrible stress.  And I just came across another blog written by a little girl I used to know.  And I wonder how is it that she became so grown up in the 13 years since I knew her?  All these kids from the old days, now serving the Lord in their own unexpected ways.

Here in the Northwest, I'm taking kids to eye doctor appointments.  Tertia got to go all the way down to Lake Oswego with me yesterday to the ophthalmologist.  Then this morning I took her along with Daniel to the vision center... Daniel to get contacts and Tertia to pick out frames.  Speaking of kids growing up... I'm old enough to have a kid wearing contacts! 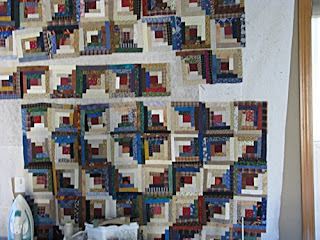 Okay, works in progress... 5/8 of the way through seaming this Log Cabin top together.  Ignore the offset blocks... I moved the finished part to the right to make room for the light switch.  These blocks were so fun to make with scraps that I bought back when I lived in Denver and Quilter's Newsletter Magazine used to have a brick-and-mortar store at their HQ.  I remember stuffing a bag with selvedge scraps for a dollar, or something like that.  I noticed a few green scraps from my very first quilt ever, finished in 1988.  There are also scraps from several other Denver-vintage quilts.  I guess that's what happens when you trot out an 8-year old UFO.  Wow, I'm nostalgic today! 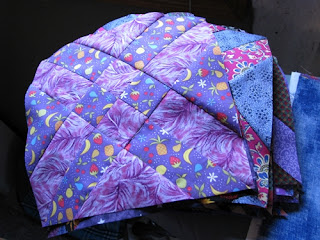 I'm working on more purple Anita's Arrowhead blocks as leaders-and-enders while I seam the log cabin blocks together.  I have 40-something now.  I should really come up with a plan for the finished top. 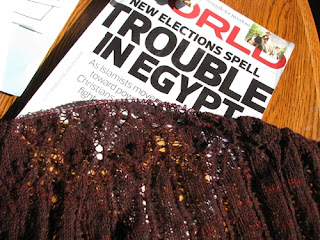 So this may not be the best picture. But for the yarn-along I am working on Lady MacBeth, the Black Roses stole, and I'm trying to catch up on back issues of World.  I'm more than halfway through the final border... so there's hope for finishing it before the end of the month and staying on track with my 12 shawls in 2012 challenge.  You can't see it in the picture, but there are tiny seed beads in there.  I've been working on this one since March, and I'm ready for it to be done!  I also need to wind 22 skeins of handspun orange superwash into balls before the Olympics opening ceremonies Friday!  Yay for orange!
Posted by Kathy at 2:35 PM