It was hubris.  I should have listened to the few posts about spinning cat I could find on Ravelry: slippery fibers, need to be blended with wool, tend to shed, felt and break.  Well, duh!  Of course cats tend to shed, that's why I had this crazy idea in the first place.  I should have taken warning that Challenge Day in the Tour de Fleece was on a Wednesday... and I've never gotten the hang of Wednesday, somehow.  I should have paid attention to my own screen name, for goodness sake.  Seize the wool!  Not the cat.  Cats don't like to be seized.  Cats are terribly, fiercely independent.  Especially Muffball.

Did I really think this creature would make a good fiber animal? If domestic longhair cats in general were a good source of fiber, don't you think we'd all be more familiar with cat yarn in the knitting world?  Don't you think maybe there would be cat farms where kitties were raised to supply fiber for the hobby spinning market?  Maybe even a reasonably priced cat-fiber sweater in the Land's End catalogue?  But I thought I would be able to do it.  Because I'm so special and talented.  I had visions of blissfully spinning a soft, fluffy laceweight yarn, maybe fine enough to make a lovely lacy "smoke ring" style cowl.  Ha!  I saved her fur for over a year.  I washed it gently.  I combed and brushed it as best I could, picking out clumps that were too matted. 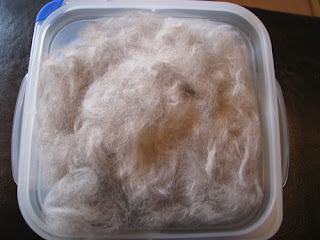 Cats attack your spinning wheel when you're using it.  Apparently their fur has an aversion to being spun on the wheel.  So I tried a spindle.  A spindle is a little like a cat toy.  I think the fur tolerates that because it is curious about the toy, just like the cat would be.  I managed, with lots of clumps and lumps and breaks, to spin all the fiber up on a spindle.  Never mind that it was not the lovely fine yarn I had envisioned.  Never mind that parts of it looked like a dryer, cleaner version of the hairballs that occasionally get deposited on my floor.  I finished spinning that ugly lumpy yarn because I'm just as stubborn as any cat. 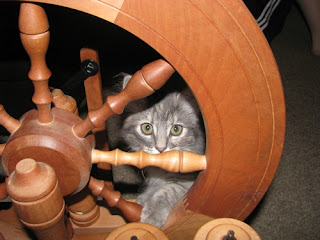 I was determined to ply it right away.  Maybe salvage what I could of the challenge and come away with enough to knit a cat toy.  Or a cat finger puppet.  So I wound the single onto my right hand to make an Andean plying bracelet.  There wasn't much; I made the bracelet before the circulation was completely cut off to my middle finger.  And then... I lost the other end.  I couldn't find it.  So I started winding the end I did have onto a bobbin.  And I discovered something.  You know how cats always land on their feet?  Well, cat yarn always breaks right about at the halfway point.  Or at least it did this time... only I didn't know that yet.  So I wound the rest of the yarn onto the other spool-like item I had handy... the handle of a cat brush.  THEN I plied the two yarns together, back onto the spindle.  It worked, kind of.  I mean, I have a little bit of cat yarn. 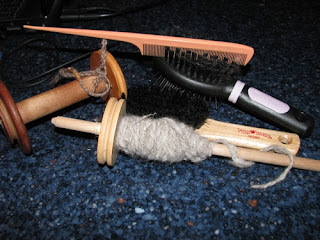 I wound it off.  It's about 15 yards.  That's how much yarn I got from more than a year of saving Muffball's fur. 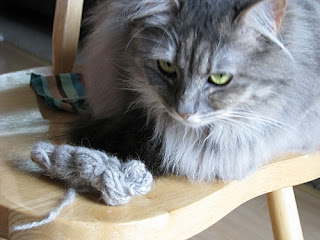 Some cat owners will tell you their cat sheds enough to knit a whole new cat.  I'm here to tell you that's not true, even though I thought it was. 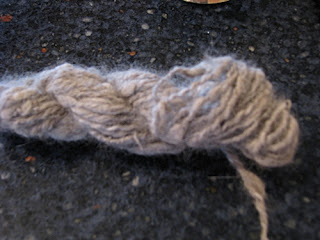 What do you think?  Enough to knit a cute little kitty finger puppet?  Maybe after my feelings have recovered a bit from the ordeal?

What a hilarious post! I followed you over here from Ravelry and am glad I did.

I hope Muffball isn't insulted that her hair never made it into production.

I have a friend in Canada that did her COE using cat hair. I think there's a trick to it somehow. (She's not been in good health lately or I would see if I could get some pointers for you.) I have spun angora that was very similar to how your yarn came out. As for spindles being cat toys, I have an eight week old Scottish fold that can't resist my spindle!