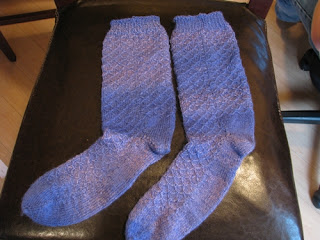 I've finished a few projects in the midst of the painting frenzy.  These are my Leyburn Socks, finished mainly during the Veritas training.  I liked this pattern but could have used more direction on the short row heels, which I pretty much faked my way through.  I've cast on socks for Primigenitus using the Stashbuster Spirals pattern to use up some of the little balls of sock yarn I've been saving.  It's a fun pattern and is very interesting in self-striping yarns. 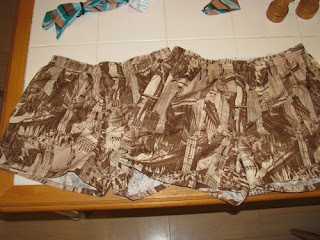 I finished two pairs of boxers in an antique-looking New York City print for Steve and Secundus (who is convinced he's going to live there someday).  These were the ones with the cursed brown thread.  My machine, newly tuned-up, did not like the brown thread I used for this, but did fine with the same kind of pink, white, grey, and blue thread during the time I was frustratedly working on these.  It would break, have tension issues, make nasty sounds, etc. with the brown thread -- then I'd give up in frustration and switch to Farmer's Wife blocks and it would hum along just fine.  I have no idea why it was just the brown thread.  And it was just in the spool: the bobbins of brown thread work fine.  Weird. 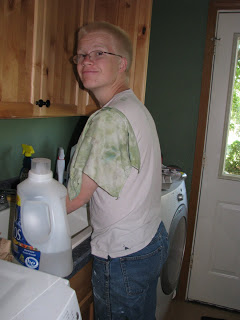 Trim painting and touch-up is going on today.  No drama with color - it's Courtyard.  Primigenitus is a good sport about having his photo taken. 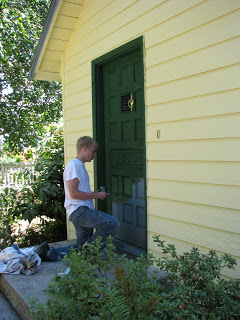 Secundus, not so much.  I'm liking the progress outside and I've also been working on the basement cleaning a bit.  Soon, too soon, I'm going to have to shift into mad prep mode for school.