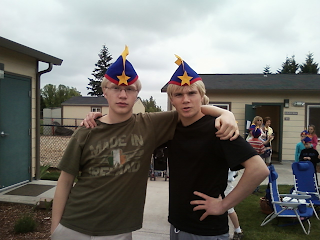 I have a love-hate relationship with Field Day.  True, I say I hate it, and I'm always scrambling to get grades calculated, and I always have an irrational moment of panic just before the teams are assigned that I will be one of the leaders and I'll have to lead silly cheers and play sports... but there's a certain je-ne-sais-quoi about it all. It is undeniably the end of the school year, and they seem to be going by faster and faster, and the kids are more and more... admirable, that's it.  I see a little payoff for all the hard work I've been putting into these young lives.  Eleven years now, and better than it was at the beginning.

Things I love about Cedar Tree: morning hymn, prayer, and flag salute continue as usual, and Mr. Bradshaw always wears his suit, even on Field Day.  The talent show has a delightfully quirky mix of acts; violin and piano solos, yo-yo tricks, pogo stick jumping, "Mr. Chin" (don't ask), a band act or two, and even an all-sister singing group to rival anything on "O Brother Where Art Thou."  The teams always have silly animal names: warthogs, jellyfish, cows, skunks, lizards, weasels, seagulls, dodos.  They have to come up with a team cheer (bonus points for classical allusions) and form a pyramid. 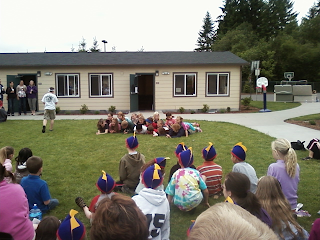 Then the physical games begin, and I bury myself in my classroom (which is used for summer storage) and try to finish grading, surfacing occasionally to chat with parents or other teachers but quickly going back inside because, although it's June, the Pacific Northwest hasn't got the memo yet and it's below 60 degrees.

I chase down students who won the vocabulary game competition to give them their $5 gift cards for Cold Stone Creamery.  Today I bought a "Got Logic?" t-shirt and some raffle tickets (and was given a few more by a parent) - and I actually won... twice!  A bug-catcher and a $10 Starbucks card.  And Quarta won a $5 KFC coupon.

Our school has upper level students divided into two "houses" (a little like the Harry Potter books).  They compete academically and otherwise all year long and the house with the most points at end of year gets a trip to Oaks Park.  My kids are Saints: the other house is Phoenix (they dislike being called Phoenixes, so in my class they are Punici: Phoenicians).  Anyway, the two houses were in a virtual tie (subject to margin of error and late-incoming grades), so the contest was decided by a sudden-death 6-minute soccer game, with two balls in play at once.  Saints won.

The car... stay tuned.  The compressor is shot and the estimate is $1760.00 to fix it.  Steve is out playing paintball with Secundus so he will have to decide tonight or tomorrow if a 10-year-old car with 125,000 miles needs functional A/C.  In this climate, maybe not, actually, but it might get hotter by August.
Posted by Kathy at 7:28 PM

thanks for posting this link to facebook! I enjoyed reading. :-)