I missed Randomday on Saturday.  Friday, as the 4th of July, was very, very noisy.  "the rockets' red glare, the bombs bursting in air, gave proof through the night" that Vancouver USA was still there.  I had to shower off from all the gunpowder smoke and the last explosions were somewhere around 1:00 a.m.

Here's a little photo essay from last week, before the noise of the 4th. 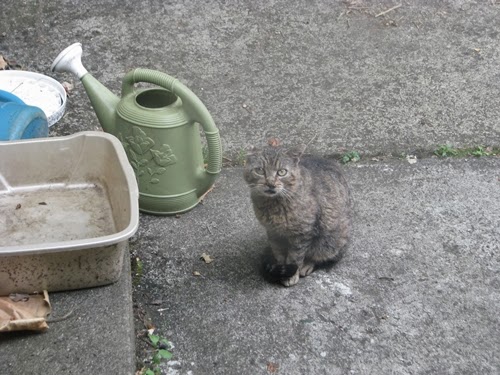 This is not our cat.  It comes to hang out with Smudge and scrounge what food it can.  We started calling it Madeye Moody because its right eye and ear look like it's been in a nasty fight with Dark wizards.  I snapped this picture through the back door window as Madeye waited for Smudge to finish eating his food.  Madeye does not let us approach yet. 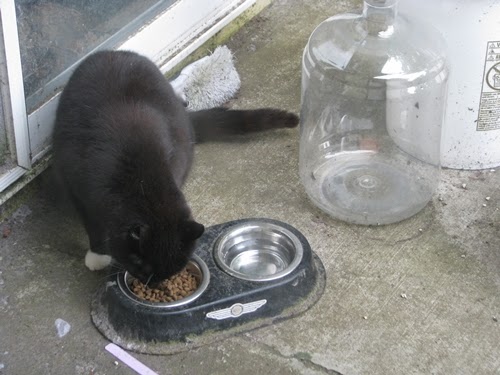 This is Smudge.  He is an outside-only cat after repeated breaches of litterbox protocol, but he seems sleek and well-fed, with little desire for adventure.  He has been sharing his hidey-holes with Madeye lately. 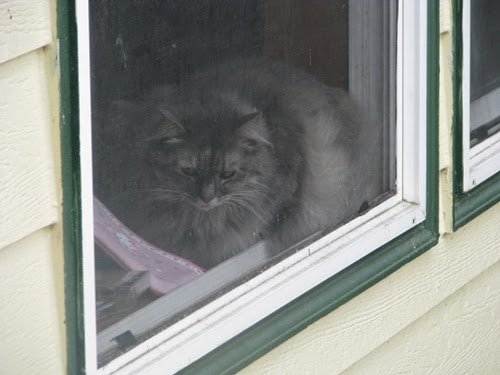 Muffball is an inside-only cat, having been rescued from the life of a stray when she was a tiny kitten.  She now gazes on the drama unfolding between the outside cats.  She knows Smudge and accepts that he is allowed on the premises (because he has shared housing with the inside cats on occasion in the basement) but she most decidedly does not recognize Madeye's right to coexist in the catosphere.

Bilbo, being the cat's cat that he is, was roaming the neighborhood and not available for pictures when I took these.

On a slightly related note, the Tour de France/Fleece has begun.  I am not doing anything official on Ravelry at this point, but... I am spinning Muffball's fur again.  It is going better than the last time I tried, two years ago.  I am using the Kuchulu Turkish spindle.  Pictures when I actually get around to it.  It's summer -- the time to do crazy stuff on the blog, and to be as lazy as I can get away with.
Posted by Kathy at 6:45 PM