Yarn-Along, and What I've Been Reading 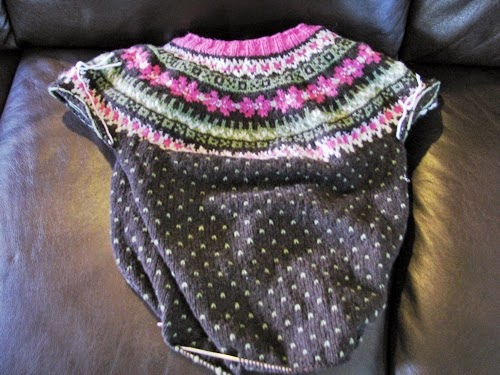 Just a little blog post to try to get back into the blogging game, to share how much progress I've made in the last few months on my sweater, and what I've been reading.  I'm linking up to the Yarn-Along at Small Things.  It's been awhile!  The sweater is almost long enough to start on the pattern I want to put in for the waistband and ribbing.  This is the sweater that I knit from the yoke up for my Olympics project, then I've just been inching along ever since.  Made from reclaimed yarns from thrift store sweaters.

I have finished quite a few fiction books recently; here are a few:

What Angels Fear, by C.S. Harris.  This is the first book in a mystery series set in Regency England, featuring a memorable aristocratic detective with a dysfunctional family and plenty of neurotic, Napoleonic PTSD induced angst, Sebastian St. Cyr.  He is a romantic figure, however, with abilities of intuition and quickness of thought that make him something of a superhero. Historical mysteries have an intrinsic appeal because in the lack of modern scientific evidence gathering, the mystery of human character is heightened.  This book perhaps overuses the red herring and introduces postmodern sensibilities where they don't belong.  The actual crime and psychological investigation thereof is a bit too graphic for anyone who started reading this hoping for a Jane Austen style period novel.  I will probably read more in the series.

Longbourn, by Jo Baker.  I listened to this on audiobook, with lyrical narration by Emma Fielding.  This is a quite different take on Jane Austen fan-fiction, kind of an Upstairs/Downstairs, servant's eye perspective on Pride and Prejudice.  If it were not for its beautiful writing, I would probably have lost patience with it for the same, postmodern sensibilities superimposed on a period piece, issue that I mentioned above.  Sarah, the young housemaid at Longbourn, interacts in mostly superficial ways with the familiar characters while longing for self-determination and love.  If you dislike characters like Wickham and Mr. Collins, you will probably find even more reason to dislike them.  But I am a little concerned that characters like Mr. Bennet and even Elizabeth and Mr. Darcy may come off as having been reconstructed into passivity in order to give a foil for the grievances of the lower-class.  It's a worthwhile story in its own right, however, and I will do my best to dissassociate it in my memory from the well-loved Austen characters it hijacks.

The Minor Adjustment Beauty Salon, by Alexander McCall Smith.  I think I have mentioned a few times that I really love these books?  So evocative of Africa, with not just memorable but lovable characters.  This is the 14th book in the redoubtable series, which shows no signs of running out of material.

Death of a Policeman, by M.C. Beaton.  I've lost count of how many Hamish MacBeth books there are, but this is the latest one.  And it follows the formula that made her earlier books so successful, but with somewhat diminished charm.  Hamish, the highland policeman with the sixth sense and bad luck in love, is indeed an endearing character, but it's been a good run and it's time to give him a happy ending.  This wasn't it.  In fact, the way Beaton has written his character, there may not be a possibility of a happy resolution for his life (and as long as he's selling well, no reason to stop writing them, I guess).  He is perpetually at odds with both the criminal class and the bureaucratic management of the police, and at this rate, there will be no unmurdered people left in the Highlands to settle down with.  Characters are introduced only to be dispatched in a gruesome way a few pages later.  It's a shame; Beaton's ability to bring a story with delightful characters to a satisfying conclusion was what started her in the detective genre.  Witness the various 6-volume series of Regency romances she wrote (under the name Marion Chesney) in the 1980's and 90's.  I recently finished the Traveling Matchmaker series (last book, Yvonne Goes to York), which is a good example of light fiction not taking itself too seriously or trying to prolong the story arc beyond reason.  This recent book doesn't suffer from a lack of imagination; rather, the character development that we enjoy has to be sandwiched between clues and red herrings for a murder we don't really care about.  Suggestion: abandon the mystery genre altogether and write Hamish one last, grand story.  Preferably where he actually connects with Elspeth around something other than a random murder.

Email ThisBlogThis!Share to TwitterShare to FacebookShare to Pinterest
Labels: yarn-along

That sweater is stunning. Keep chugging along! I think is great how you're using reclaimed yarn and double recycling a sweater.

Kathy, that's really pretty and done with amazing skill. makes me want to get on the list ... you know ... the give a way list. :)

Wear it with joy and pride!