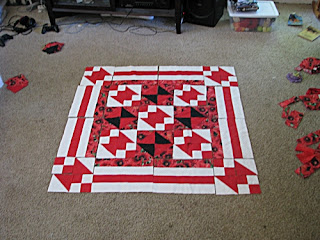 All by herself, Quarta came up with this design using some UFO blocks and patches that were in that big tub of scraps I got at the estate sale a few weeks ago: 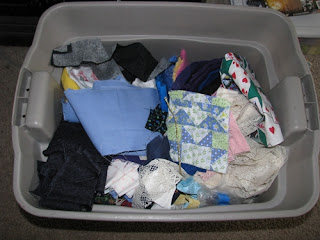 (The tub itself is still sitting in the family room, waiting to be sorted through.  I just pulled out some obvious projects for her to work on and fabrics that she liked). 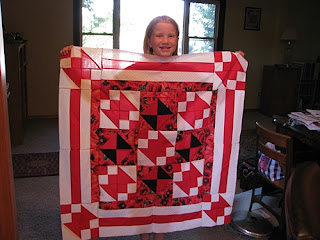 Yesterday she sewed them together.  I taught her how to make coping strips of some of the poppy fabric for the four hourglass blocks, which were about 1" smaller than the red and white ones.  For today's project, she baked and is frosting cut-out cookies.  I really wish I had one quarter of her energy.  My project today had to be something to clean the house, so I chose the linen closet upstairs.  Well, it's not really a closet because it has no door, and blankets and sleeping bags were spilling out into the hallway.  It was a small enough project I felt I could tackle it. 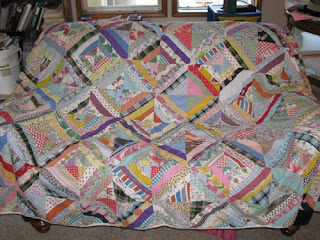 I found this old quilt, much loved and partly tattered, that Steve's grandmother pieced and his mom tied.  Daniel remembers the tattered spots fondly from when it was on his bed. 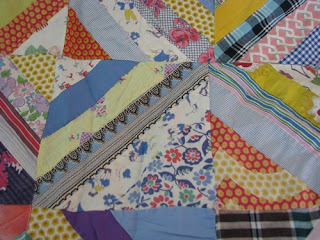 There are some great vintage fabrics on these old string blocks! 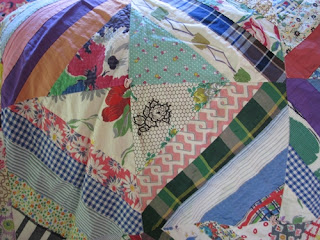 I just couldn't resist bringing it out for a little photo op on the blog.  My own quilting has been limited lately, but I'm determined to finish seaming up the Country Stars quilt in the next few days.  Maybe now that my linen closet is clean and organized I can justify some play in the sewing room. 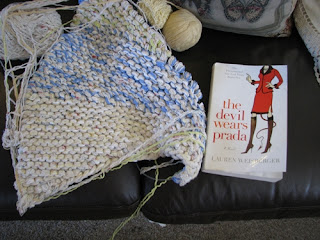 I have been knitting a bit on my second Circle of Fun rug using lots of reclaimed cotton yarns.  And I read The Devil Wears Prada, which just happened to be on the staff picks shelf at the library.  I'd seen the movie and it was a fun read.  However, I think it's one of those rare instances where the movie is better than the original book.  I found Andrea, the first-person narrator, less sympathetic because of her constant snarkiness than Anne Hathaway's character in the movie.  The portrayal of the boss from hell who mistreats her employees and forces them to neglect their own personal and family lives is about the only plot point, so the book reads like a lengthy tabloid expose.  But I was irritated by Andrea's spineless, passive-aggressive response to her situation, and couldn't really sympathize with her much.  And last week, when I reviewed the latest Tom Clancy book, I put in a caution about language... well, this little book surprised me by dropping more F-bombs than that 800-pager.  Maybe New York girls really do talk like that, but it sure didn't make me like them, or the chick-lit they show up in. 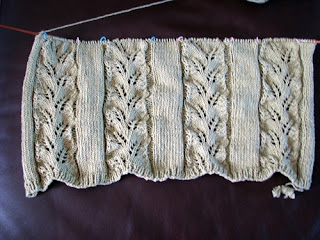 This is how far I've gotten on Rosalind.  It's starting to be pretty, but there's a long way to go yet.  Linking up to WIP Wednesday and Yarn-Along.
Posted by Kathy at 2:49 PM

Her quilt top is lovely! I never would have guessed that it started out as an estate sale UFO.