I have been neglecting my blog, so I thought I'd do a catch-up for everyone with a Randomday post.

We went to Camp Morrow for 1st OPC Family Camp.  Daniel had to be on a red-eye flight early Saturday, so I drove him and Peter back after the Talent Show (at which a highly-amusing version of Telephone/Clue/Charades had speaker Larry Wilson trying to inform Mr. Southgate that a clown was killed on the volleyball court with a cinnamon roll).  He caught his flight and has just finished up his first day of classes in his sophomore year at Grove City College.

Of course one of the grand highlights of Family Camp is the annual Bananathon.  It happens to be the only event I have pictures for, too. 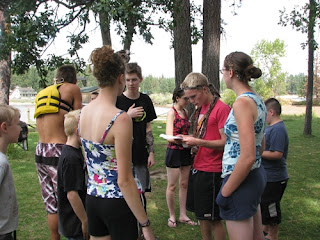 Secundus was a team captain this year, with Tertia on his team.  Here is the pre-contest strategy session.  Daniel and Quarta were on the other two teams, so no matter who won, we had at least one kid to cheer for. 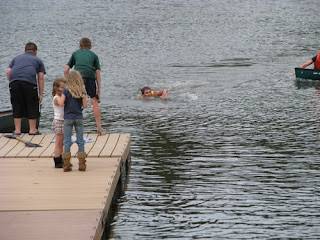 Turns out that even if the bananaholder is on his school's swim team, having to wear a life vest as a handicap slows him down enough that he might as well have stayed in his canoe.  There followed in close and dizzying succession the other events after the banana hand-off... splashketball, frisbee toss, pudding/bubblegum race, three-legged race, and the race to the flagpole with the banana being tossed from hand to hand. 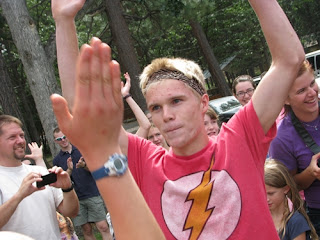 Secundus' team was victorious after he ate the banana (which was frozen) and gave a whistle. 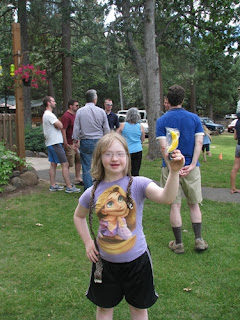 Back home and after a full weekend to try to recover, I have ratatouille in the oven along with some chicken kebabs.  What do they have in common?  They are both ways to use up zucchini!  I didn't even come close with the double batch of zucchini brownies I took to family camp.  There are still 11 zucchini on the countertop.

I just checked on Daniel's plum wine in the cellar.  It has this little airlock contraption on the carboy to let carbon dioxide escape without letting in oxygen.  Before family camp, it was releasing a bubble precisely every 17 seconds.  It has slowed down now to once every 36 seconds.  I have no idea what this means though.

"The ability to simplify means to eliminate the unnecessary so that the necessary may speak."
-- Hans Hofmann
Posted by Kathy at 5:26 PM