Lately I have been feeling thin, sort of stretched.  Like plum butter that has been scraped over too much bread.  I am ready for plum season to be over.  However, I am not ready to go back to school.  I have an uneasy feeling that the one will inevitably lead to the other, and I don't like it. 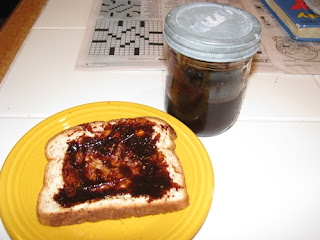 I started with about a gallon of halved, pitted plums.  It's approximately the same as it takes to fill a dehydrator or make a recipe of plum chutney.  My thumb has a sore spot on it from pitting the plums.  I diverged from online recipes by using my crock pot for the major part of the cooking.

Place all ingredients in stockpot, bring to boil and simmer slowly, uncovered, for 1 1/2 - 2 hours, stirring frequently.  Let cool slightly, remove cinnamon sticks and thyme sprig, and press through a food mill into a large crock pot.  Set heat setting to low and leave cover off while mixture slowly cooks down, 8 - 10 hours.  You can stir every hour or so if you like.  I let mine go overnight, and woke up once at about 3:30 to the aroma of spicy plum butter and went down to stir it then.  After the final stir-down, it's nice to give it a final puree with an immersion blender to even out the texture.  Can in 1/2 pint or 1-pint jars in a boiling water canner for 10 minutes.

That recipe went better than my attempt to make a double batch of Cinnamon Plum Jam.  Unfortunately, my stockpot was not big enough for 14 cups of sugar and the plums that went with them, and when I added the pectin, I had a boilover.  I couldn't cook the mixture at the full rolling boil required to activate the pectin and so my plum jam is runny.  I think it will thicken up if I boil the contents of each jar individually after I open it up and then put it back in its jar, but it essentially spoils any chance of giving the jars away as gifts.  And the surface of my glass cooktop bears the pitting scars from when burnt sugar gets crusted on.

My endurance for plum season may not last much longer.  I might have one dehydrator load and a few quarts of frozen plums in me still.  I made another pflaumenkuchen recipe today.  I would kind of like to try plum preserves, or basically, whole plums in syrup. 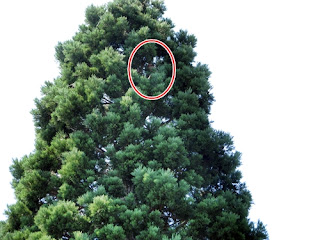 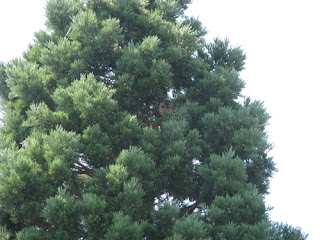 The children have been rediscovering the cedar tree.  That's Secundus, way up there.  Daniel and Quarta wanted their turn too, almost as high.

Secundus is working at the fair, cleaning bathrooms.  Daniel is attending a weekend conference in Oregon.  Quarta attended a 4-day tennis camp this last week.  Tertia is not doing much of anything and seems to like it that way.

We went to the fair yesterday morning.  My knitting all won blue ribbons; my quilts and yarn won red ribbons.  Quarta's pillow got a red, and her zucchini got a blue.

We took the girls to the farmer's market this morning and bought the ingredients for a dandy fruit salad for supper.  Also some basil and lovage to plant, from Grace's Garden.  And kolaches, because Steve can't resist them.

And I found the perfect quote for Steve the other day while playing cryptograms:

"I can't say I was ever lost, but I was bewildered once for three days."