Quilts of the Past: Jane's Wedding Ring 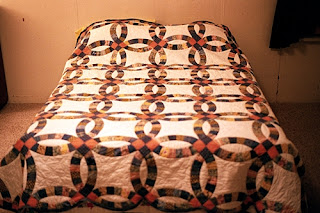 I'm continuing to participate in the "31 for 21" blogging challenge to raise awareness of Down syndrome this month.  However, there's really just so much I can say about Down syndrome, and while digging around for cute pictures of my daughter from her early years I found this quilt I've never shared with the blog world.  So hey!  Easy Monday entry.  And for the first time in a couple of weeks I have something to share with the Design Wall Monday, even if it's 12 years old.

My college friend Jane got married in the fall of 2000, the last of our group of friends to tie the knot.  This is the second Wedding Ring quilt I made using John Flynn's book, which I highly recommend.  Someday I'm really going to make one for Steve and me.  But anyway, Jane's colors were blues and peach, so I had a great deal of fun piecing it because I love those colors too!  I can't remember much about the quilting process, but it was on my trusty old Viking that I still have... it was long before I had the Megaquilter.  I do remember spraying it with water to get the water-soluble blue marks off afterwards.  Binding a double wedding ring quilt is time-consuming... this was before 9-11 so I took it with me in a bag on the plane, along with my little needlework scissors.  I had a layover without having to change planes midway through, maybe at St. Louis.  The gentleman on the aisle seat also stayed on all the way through D.C., and the scissors came in handy when his lunch had a bag that wouldn't open.  I put the last stitches in on the binding about an hour before landing at Reagan National.

That was the first time I'd been away solo from the kids and Steve.  I called home the first day and Secundus had stuck some keys in a power outlet.  That was back in his danger-toddler days.  My friends were struck by overhearing my side of the conversation: "Did he electrocute himself?!"  He didn't.

Beautiful quilt and I love hearing the story behind it!

We were told our son, Ben, had a 1 in 60 chance of having Down Syndrome. 13 years later, he was not born with it, but other huge, life changing, altering complications.

Thank you for this post and the one before! I love your heart!