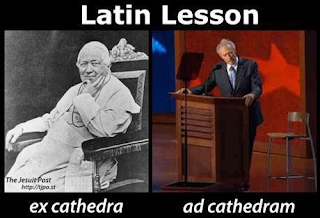 Who would have thought that Clint Eastwood, famed tough guy of the silver screen and an American icon, would (a) gain fame as a political satirist and (b) help to address the tricky distinction between the ablative case and the accusative case?  I'm afraid I probably can't use it with my 6th graders though... they'd wonder who that fat guy is.

An empty chair is a good metaphor for Obama's administration.  It's kinder than anything I can think of, off the top of my head.  When he took office, I thought at least he would help in a symbolic way to heal some of the tensions of racism.  But really, the Democratic party can't seem to survive without keeping racial tensions amped up.  And Obama has added class warfare and a French Revolution mob mentality to our polarization.  It's worse than in the Clinton administration (and I thought I'd never say this, because I really, thoroughly despised Bill Clinton... but at least he was an artful compromiser and knew how to work with Republicans).  Now, reportedly even Nancy Pelosi is putting her phone on mute so she can get on with whatever work she does while Obama postures.  Without real leadership, we really will hit that fiscal cliff that Merle Hazard sings about.

The most recent attack on Romney from the Obama political machine is that Romney said 47% of Americans who are dependent on government handouts will automatically vote for Obama out of loyalty.  I'm not quite sure why this is supposed to be a scandal.  What concerns me more is why there is no media coverage of the statistics behind this.  Really - 47% of Americans, nearly half, pay no taxes and have no real stake in our government?  We're all familiar with the "No taxation without representation" quote that launched our Republic.  What about "no representation without taxation?"  Is it really good for the country to have a soon-to-be majority class -- let's just call them the Plebeians -- receiving handouts from one party and making no contribution other than their votes for that party?  This sounds ominously similar to some of the social tensions that ultimately led to the collapse of the Roman Republic.  The Empire, because of its strong military and its making a religious obligation out of worship of the Emperors, lasted hundreds of years more, but eventually it too ran out of other people's money.

Now, I've been a social issue voter all my life, and as a dedicated pro-lifer I must point out that Obama has in the past supported infanticide.  But even I answer political polls on the most important issue in this election as being the economy (although after last week I'm thinking of changing to keeping America's foreign policy strong ... but it may very well amount to the same thing).  Whether Obama is more likeable than Romney, whether Romney is the ideal candidate, whether Ron Paul got 2 or 3 electors, even whether Romney would take meaningful action to stop abortion -- these are all distractions from the historical crisis we will face if we don't take a grown-up look at the situation and end Obama's quest to discover himself before it ends us.

Any readers in Ohio, Pennsylvania, Virginia, Colorado reading this... I used to live in your states, but I'm no longer registered to vote there and now I live in a state where my vote is basically meaningless, diluted by a hefty concentration of the 47% and all those Seattle liberals who carry around ballot boxes in the back of their hybrid cars.