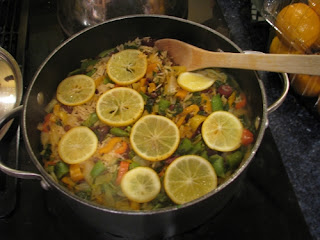 Some nights I just don't feel like cooking.  This week has had a lot of those nights.  I've been scrambling to print out final exams, restock the pantry after last week's deluge, and now grade final exams.  Yesterday when the usual inquiries after dinner began, I decided to throw the Costco chicken and apple sausages in the oven and make a rice dish to go with them, somewhat inspired by paella but without any meat... because the meat was in the sausages.  Practically all the ingredients for this lovely looking dish came from Costco.  The day before we had Costco chicken for dinner and I made stock afterwards from the bones in the crockpot.  I used the stock to cook the rice dish: I had thought I'd make soup, but didn't have the energy to make it.  It came out so pretty that I had to take a picture, and I knew I'd be in the throes of grading tonight so thought it might be an easy blog entry.  Here's my approximation of a recipe, because I didn't take notes.

Put a swirl of olive oil in the Dutch oven and saute a chopped onion and several sliced mini sweet peppers.  Add about 1/2 C lentils and 2 C Jasmine rice, some chopped snap peas, and saute slightly.  Add 4 C chicken stock, the dab of tomato soup and small serving of leftover broccoli that was languishing in the fridge, several chopped Kalamata olives, some chopped fresh cilantro, some seasonings (salt, pepper, smoked Spanish paprika, thyme, basil, etc.)  When the stock comes to a boil give it one last stir, put some thin lemon slices (Meyer lemons from Costco, supposedly they're "chef's choice") on top, turn the heat to low and put the lid on.  Leave it to cook for 25 minutes while whatever meat you're planning heats up, and get someone else to set the table and toss a salad.

I don't know if you can call it paella if it doesn't have meat in it, but it's a whole lot nicer than rice-a-roni and not that much harder.
Posted by Kathy at 10:42 PM