Every new parent of a baby with Down syndrome gets to read the "Welcome to Holland" essay by Emily Perl Kingsley.  If you haven't, you should.  It speaks beautifully about how your life is changed in unexpected but good ways by having a child with a disability.  For example, I become something of an avenging fury if kids use the word "retarded" as an insult in my presence.  And I think this picture, of my daughter taking her first steps while giving herself a round of applause, is one of the most beautiful in the world: 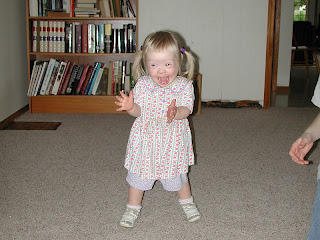 Now, in the real Holland, they have produced a series of short soap operas called Downistie, set in a world where everyone has Down syndrome, and pregnant women worry about a negative prenatal diagnosis for their children.  Here's one with subtitles; it's a real hoot:


Generally speaking, I'm in favor of pulling the plug on the soap opera genre, but I'd make an exception for this show.

Soap operas aside, the future for kids with Down syndrome presents unique challenges.  At present only 10% survive a prenatal diagnosis; not because of medical issues, but because abortion is widely seen as a preferable alternative to bringing a handicapped child into the world. (A friend tells me her doctor told her, "If it happened to me, I couldn't do it because I just don't have time to raise a special needs child."  Well, you can see why ordinary women might get the idea that Down syndrome is the Worst Thing Ever.  Thanks, medical establishment!)

That 90% abortion rate may go up even higher with the new fast, easy, accurate blood test for Down syndrome.  Now, pregnant women can find out even earlier whether their child has the extra chromosome 21, so that presumably they can have a "therapeutic termination of the pregnancy" (I recall the words graven on my memory from a handout we got at the hospital 12 years ago) while still in the first trimester.  The new blood test will also very likely make it harder to fund real scientific research on treatment options for Down syndrome, as this NYT article describes.  And as other sources who make it clearer than the NYT have observed, when there are no more patients with Down syndrome left, no one will be doing any research to benefit them.

I'd rather live in Holland, thanks.
Posted by Kathy at 5:42 PM

Email ThisBlogThis!Share to TwitterShare to FacebookShare to Pinterest
Labels: down syndrome, family