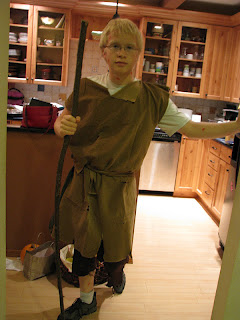 The best costumes are cobbled together in 5 minutes.  Primigenitus wanted to be Job for Reformation Day, but Quarta had dibs on the one standard tunic from the dress-up box.  So I rummaged in my sewing scraps and found two lengths of corduroy, one tan and one green, from when I made little baby clothes for him... coming full circle.  I sewed side seams and shoulder seams and gave it to him to tatter further.  Those are his Hobbit pants and walking stick from last June.  Boils courtesy of Crayola washable markers.  They are mostly washable. 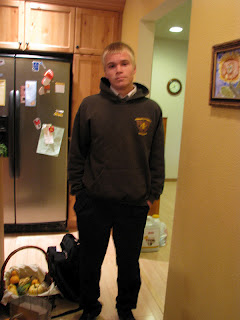 Secundus is too cool to dress up, so he went as a Cedar Tree student.  And made sure not to smile.

Tertia had a field trip to the pumpkin patch today, and wore ordinary school clothes.  She also participated in an assembly where her dance class entertained the rest of the school with a rendition of "Thriller."  She came home with green stripes painted on her cheeks, and a small pumpkin in her backpack.  Because she goes to public school, she is the only one in our family who knows the dance moves for "Thriller" and the Macarena.  Seriously, she should get some kind of special recognition for this. 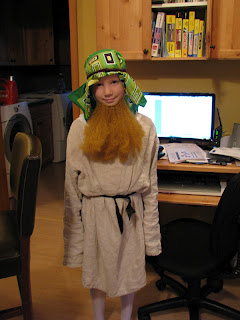 Quarta saved her fake beard from the silly Family Camp video.  She and her 2 friends were going to be Shadrach, Meshach and Abednego, but word leaked out so to preserve secrecy they switched to Abraham, Terah, and Isaac.  I think.  That linen tunic I picked up at a thrift store 15 years ago has seen service at least once a year ever since.

All the festivities at school meant no Latin classes today, but I had so many errands to run after a week of parent-teacher conferences and heavy grading that I didn't really get any time off and the house is still a wreck.  I did pick up the Megaquilter from the dealership but I haven't had time to test it out yet.  I'm a bit nervous about whether I can get it back up and running on the frame.

There is SO MUCH Latin teacher work to do still!  I have my pretests graded, but Finals to edit and print out still for next week and the specter of much more grading and lesson planning in the near future.  So in honor of Reformation Day, I will sign off with all my sayings for the week:
Sola Scriptura/ Sola Gratia/ Sola Fide/ Soli Deo Gloria/ Solo Christo
Ad fontes!
Cujus regio, ejus religio
Post tenebras, lux.
Posted by Kathy at 10:06 PM

Love the names for the munchkins! Yeah, Kyle borrowed one of Mrs J's outfits--the first year ever that he's "dressed up" for Reformation Day.
Youngest is still not into it yet. He tends to copy his big brother, so we'll see!

As someone who "took" Latin for 6 years in school (many years ago) and sings in a choir that seems to specialize in singing in Latin, I did enjoy your post!