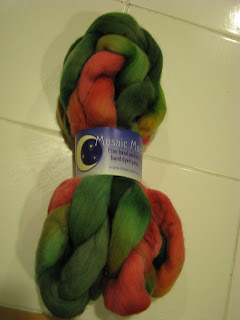 A friend gave me this Mosaic Moon roving (merino in the "Midsummer's Eve" colorway) a month or two ago.  I spun it up: 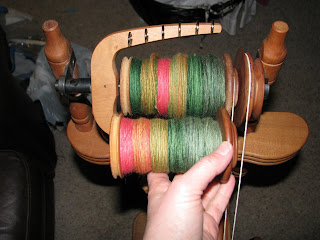 My idea was to divide the roving into two parts, and spin them in such a way that the color sequence stayed in sequence for each half, so that when plied they would roughly match and there would not be rampant barber-poling.  I was unsuccessful: 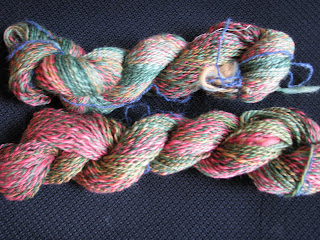 Whether because the roving had different amounts of green and pink at the places I divided, or because I miscalcluated, the ethereal color progression I was hoping for did not keep up after the first bit of green with green.  So, I don't think this will make a good shawl.  Maybe a baby jacket.  It's about 320 yards of sportweight.
I'm not disappointed, actually -- I've spun yarn like this before.  It's fun and colorful.  But for the look I was envisioning I think I would have to be much more scientific in the spinning process.  More scientific than I am willing to be.  For starters, I'd have to get a scale to weigh the wool before dividing it.

So -- how about that royal wedding?  Specially composed music by John Rutter, maple trees in Westminster Abbey -- it was like church music geek heaven.  And the dress was pretty too.
Posted by Kathy at 12:47 PM

Email ThisBlogThis!Share to TwitterShare to FacebookShare to Pinterest
Labels: spinning