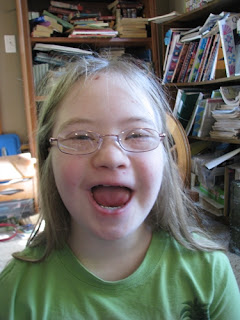 Miss Tertia has new glasses.  They are a stronger prescription than before (which was pretty strong already).  Glad for the friendly people at America's Best who made sure she got the best frames for the weight she needs and fitted them nicely.  She tried on two or three, but went right for the pink ones.  It was much easier than the 4-hour round trip to the ophthalmologist office in Tigard, but they were awfully friendly too, considering how late we were with the traffic.  I may or may not have taken a solemn vow never to drive to Tigard again, but it was better after a Burgerville blackberry milkshake. 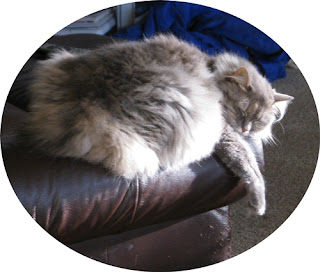 This is exactly how I feel this summer.  Sleeping in a sunny but precarious spot is really all I aspire to.  Actually, I have been busy with things not many other people really care about... working on a volunteer unofficial Latin for Duolingo course, and now putting it on Memrise.  For a break, I try to solve at least 20 cryptograms every day.  I feel compelled to watch or at least listen to the entire long versions of the Planned Parenthood expose videos, which tends to make me feel depressed and lethargic.  As does the thought of back-to-school (though in a totally different way).  Yep, the eccentric, somewhat antisocial, lazy cat metaphor is pretty much me all over. 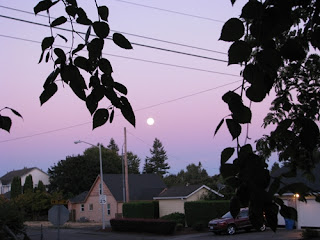 There was a really pretty full moon a week or so ago.  This was my attempt to capture it. 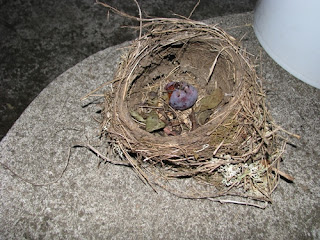 Plum season is over.  I picked this birds' nest off of one of the broken branches, with the plum in it already.  I don't think the birds were actively using it but it was on the part of the tree that is going to have to be cut back anyway.  Grapes are now just beginning but they are still a bit tart.

Quarta had to be driven to camp this morning.  Fortunately it was not in Montana this time, but it was in Oregon and I may or may not have gotten somewhat lost while Quarta was becoming quite carsick in the twisty roads above the Gorge.  I ended up calling Steve when I figured we were not on the road I wanted to be on (the "shooting prohibited" signs were a huge clue) and he was able to help me figure out I wasn't as lost as I thought I was, and the camp was really just a mile away.  This may be the adventure that convinces me a smart phone would be okay.  As a side note, we discovered that Quarta has no time to think about being carsick when she is talking on the flip phone to Daddy.

On the way back I took Tertia shopping at Cascade Station and we found a clearance pair of Ecco shoes in her size (4.5) at DSW.  So I signed up for a customer rewards card, since the Famous Footwear that used to be so convenient to us is now closed.  Tertia was willing to look a little in one more store, Ross, but when we came out and I offered her the choice of what store to go to next, she said she wanted to go home.  So I said, "I guess you aren't the shop till you drop kind, are you?" and a sweet lady who was going out at the same time overheard and said, "You are blessed! It's expensive!" I guess we are.