The first week of school is in the books.  Well, not exactly, because I haven't entered any grades yet.  I came down with a terrible cold the second day and it wiped me out for a day, then became bearable until last night when it turned into a constant hacking cough from somewhere deep in my lungs.  The first round of laryngitis is due to strike about Monday morning.  I usually work in at least three a year, but I'm starting early.  I have fifty students in three grades.  That is an astounding number of young people. 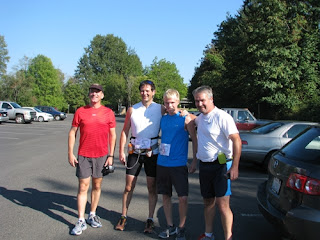 Secundus ran his first marathon today.  Mr.Mac has been training for some time for his own personal Iron Man competition, and Secundus ran the marathon leg with him. 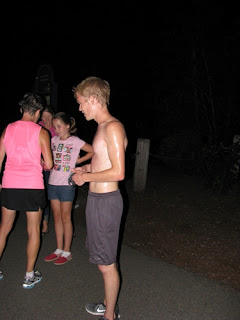 Start to finish in a little over 4 1/2 hours (I couldn't actually see my watch that last bit).  He said it was easy until his legs started hurting in the last 3 miles.  Secundus has had a busy couple of days: he finished 3rd in his cross country meet yesterday.  And Francesca (the red Mazda pickup) came back from the shop today.  We spent a lot more money on the temperamental redhead than we would have liked.  She had some fuel pressure and fuel line issues that were a serious safety concern, but she finally passed emissions, to everyone's surprise!  Now she needs to be licensed, and Secundus will need to practice driving stick before we let him drive her to school with Quarta on board.

Speaking of driving to school, I am making three round trips on Mondays and Tuesdays, and two round trips the other days.  On days when I drive the homeward carpool, my van may have 4 extra children on board, and I will have to be very creative to make sure that I am not late to get home to meet Tertia's bus, as I was Tuesday.  And on ... I think it was Wednesday, as I was driving to school down 199th street, a large spotted pig crossed the street in a leisurely manner in front of me.  An oncoming car also stopped to let it pass, and we two drivers exchanged a bemused glance, and then moved on.

I am caught up on Latin homework but am letting Steve work on Greek without me for now.  Maybe I'll shuffle the vocabulary cards or something.

The house has reached new lows of filthiness, and I have not quite but almost given up caring, because I am simply too exhausted and nothing I do can fight back the flood tide anyway.  Steve is making applesauce, which means more fruit flies, apple peelings and dirt ground into the floor, and spilled applesauce on the cooktop.  I did experiment with a few fruit fly traps.  I like the kind where you put apple cider vinegar in a small jar, cover it with plastic wrap held on with a rubber band, and poke holes in it with a toothpick.  But the floor is staying filthy until someone else decides to clean it.  It will be interesting, because Grandma is coming over tomorrow.

I am going to drink half a glass of hard cider and go to bed.