First Day of School - the Schedule

6:00 a.m. - after fitful sleep, began the day by attempting to wake up the brain with a sudoku or two.  Then shower and dress.
6:45 - suggest to children they should begin waking process.  Quarta was already dressing, the other two were a harder sell. 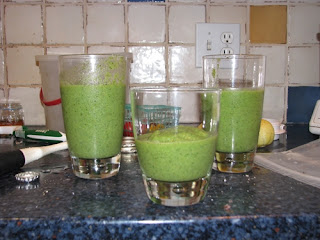 7:15 - packing lunches and making a green smoothie for breakfast.  (Kale leaves, 1 mini cucumber, 1 green apple, 1 1/2 frozen bananas, mint leaves, vanilla almond milk, a dab of vanilla yogurt, some flax seeds and ice cubes).  This is the only back to school photo that made it onto Facebook.  The reaction of my friends ranged from "looks disgusting" to "nutty, crunchy-granola type" to "looks delicious, so healthy."  Obviously, green smoothies are fraught with controversy, but I don't think I would have made it through the morning without it.
7:50 - Penny arrives to pick up Secundus and Quarta, before I even thought about taking their back-to-school photos and posting them to Facebook.  Penny had lovely photos of her kids, I saw them later.  Everyone else had lovely photos.  I took a picture of glasses of green sludge on a messy countertop.  Hey, I've also been teaching a dead language for 14 years.  It takes all kinds.
8:27 - after cajoling and pushing and hurrying Tertia along to get ready in time, her bus shows up and she gets on.  The driver apologetically explains she has another student to fit into her schedule and will show up even earlier tomorrow.  I explain that this is good for me, but bad for Tertia, who has never been speedy in the mornings.  I will have to push and cajole and hurry faster tomorrow.
8:40 - I make my first of three drives up to school, find a parking space in an unusually crowded lot (just about every parent except me was there for the opening at the flagpole, it seems), and find room 503, where I hole punch 3x5 cards in an array of colors and count them out in the appropriate sequence for vocabulary and grammar cards for 3 classes: one with 14 students, one with 19 students, and one with 15 students.  This takes all the time I have until...
9:20 - I walk into the 6th grade class and greet Quarta and her classmates, who are starting off with 1st declension nouns.
10:15 - room 503 again, where my desk is, and 8th grade, which is reviewing 3rd declension nouns in preparation for a rigorous course of study culminating in translating excerpts from Caesar's Gallic Wars.  I find out afterwards that one new student has had zero Latin before, and I was not aware of this beforehand.
11:10 - room 403, 19 7th graders, several of whom did not have their books or other supplies and had many questions about how they were supposed to get those supplies, which I couldn't answer.
12:05, back to my desk, where I drank water for the first time since leaving home, tried to organize my notes for the next day, and took a bunch of master copies to the office and copied the next set of handouts for tomorrow, before driving myself home in a state of utter fatigue and hunger.
1:30 - warmed up some leftovers for lunch and relaxed for a short while before
2:10 - driving up to school again, arriving 2:25
2:35 - with Secundus, drive south to drop him off at Cross Country practice, arriving 2:50.  Turn around, drive right back up to school, arriving 3:05.  Pick up Quarta, and 3 other West side students who need to be carpooled home (one of whom wasn't sure she was supposed to go with me).  Tomorrow there will be 4 kids besides Quarta.  Drove N&S home first, getting a bit misdirected along the way, then O., and by that time Quarta and I made it home at 3:38 -- exactly 2 minutes before Tertia's bus pulled up.  Then it was back into the car to take Quarta to an appointment at 4:00, and home again just before 5:00, seeing Secundus breaking and entering into his 2nd story window (his house keys are on the chain with his car keys, which are with Francesca in the shop).
5:15 - cooked spaghetti and meatballs for dinner while tearing up from the realization that I will have to do it all again tomorrow, except it is an assembly schedule so classtime is even shorter and I will have one more kid to take home and beat the bus in the afternoon.  Correction, two more kids, one of them going with Secundus to sports practice.
7:30 - realizing I would either have to spend the evening curled up in the fetal position sobbing or knitting and drinking something mocha at Starbucks, I drove to Starbucks and knit a bit with my knitting friends.  I was somewhat heartened to be informed that I am considered an expert at Fair Isle in that circle.  I desperately need to be an expert at something, and it is painfully obvious it is not being the carpool mom.