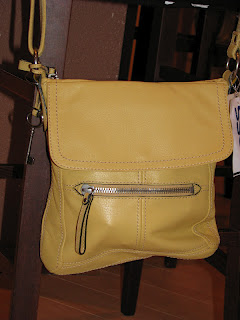 Today I bought THE purse, the one that will solve all my organizational difficulties.  It's by Fossil, and I got it at Ross for a reasonable price considering its original price.  Since I got glasses I have found that my little red hobo bag is not big enough to keep all the stuff in and zip shut too, so I've been looking for something that will do that and yet not be a humongous shopper bag.  And it's such a pretty yellow! 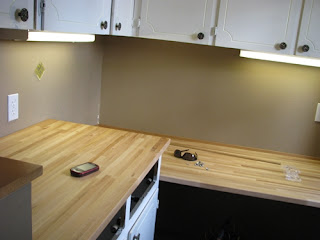 Yesterday John the handyman came and put butcher-block tops on my counter areas.  They are so much more solid than what I was using!  But I haven't moved back in yet.  John was shy about having his picture taken but he works for Handyman Can! and they do great work. 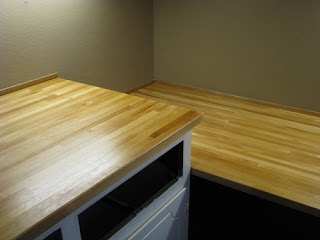 John suggested a coat of Varathane so I've been doing that.  I was going to leave it plain because I like the smoothness of unfinished wood, but he pointed out that if I put a glass on it it would leave a ring.  It's now had 3 coats of clear satin and I'm waiting for it to get really dry and hard before putting stuff on it.  I also painted touch-ups on the mocha wall paint and used some old black paint to cover the support boards underneath the sewing area.  I almost feel like doing a complete painting job and repainting the cabinets, which are definitely relics of an earlier era.  Maybe this summer. 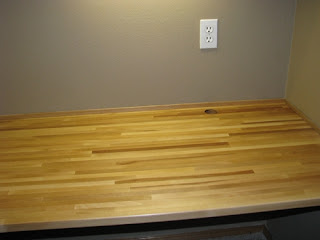 I asked for a cord hole underneath the outlet (which is the only one on that wall) so I can connect the pedal to the machine without passing it around the front of the table like I've been doing for years. 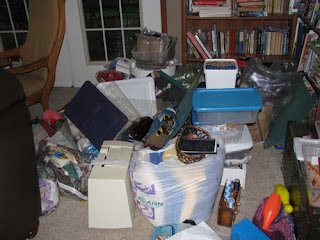 Next I just have to move all this stuff back in.