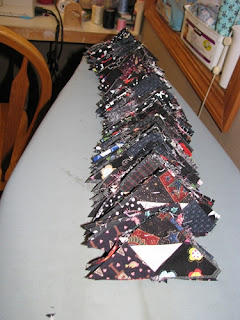 You may remember that the last time I mentioned the Orca Bay mystery, I was more than a full step behind the clues due to the necessity for the bare minimum of Christmas preparation (and I assure you, it was very minimal!)  I'm still loving Bonnie Hunter's mysteries and her ultra-scrappy approach to making quilts in general, but I have to admit, she definitely is not the "less is more" kind of person.  I am so fine with that!  More is more!  But it also takes longer.  And I have to do things in sequential order, and never, ever, skip ahead.  That would be like skipping a lesson in the Latin book, and I never do that either.  So this morning I finally finished step 5, adding wing triangles to my HSTs from step 3.  That was a lot of cutting, and a lot of piecing, nursing along a spool of pink thread that I wanted to use up because somehow it got loosened from its spool (I blame the cats): 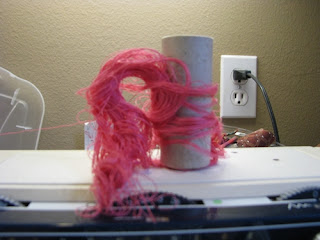 I was not about to let that thread go completely to waste!  I managed to nurse it along for a good long time by using my Grandpa's wooden thread-holder thingy.  Even though I was sewing black and white fabrics.  I did end up having to throw several yards away, but not much.  Especially when you consider that this photo was taken after using more than half of it as-is.  Yep, I can be pretty thrifty about a $4 spool of thread.  When I counted up all the triangle units from step 5, I had 360 total.  That's 10 more than I needed! 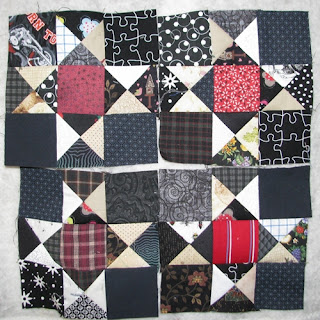 I've started step 6; all the black and red squares are cut and I can now join them into the Ohio Star blocks.  I love this block; it was my first quilt way back in the late 80's, pieced by hand.  My blacks are awfully busy; but that probably helps hide the imperfect seams.  I've got pirate skulls, stars, flowers, puzzle pieces, plaids, and I've been trying to use up some of my MIL's bowling, soccer, and motorcycle themed fabrics too.  Motorcycles that say "born to run!"  (I am not a motorcycle or skull person in real life, just so you know!) I really like the way the black, white, and red blocks have such visual pop, and I'm getting excited about the next clue.  I'll link this post to Quiltville where the other Orca Bay participants are sharing their progress.  It's so fun that people from all over the world are doing this mystery.  I love following bilingual blogs and you can find quite a few there. 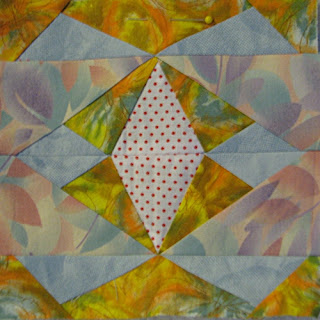 It's been a few weeks since I last updated my Farmer's Wife Quilt blocks.  This is block #78, Shooting Star.  It wasn't my favorite design so I decided to use fabrics that I didn't like that much but that looked like starlight, and I actually like the finished block, a little bit.  It was paper-pieced after I drew it on graph paper. 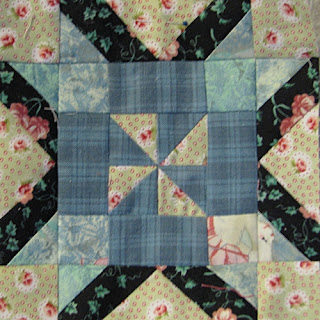 Block #79, Silver Lane.  I chose "silvery" fabrics and I like this one, even if it does look a little too much like a Space Invader. 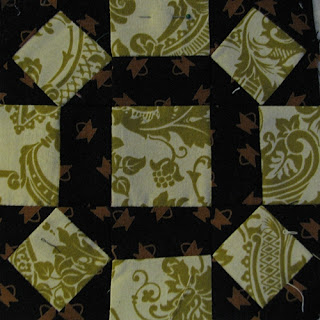 Block #80, Single Wedding Star.  I had the black/white color combination on the brain because of Orca Bay, and I just went to a wedding with those colors (and the bride wore pink shoes, and I used pink thread to piece it!), so this came about as a result of that.  I only had a tiny bit of that basket fabric, but it felt very wedding-y.
Posted by Kathy at 2:14 PM

Wow, you're dedicated to have saved that spool of thread!