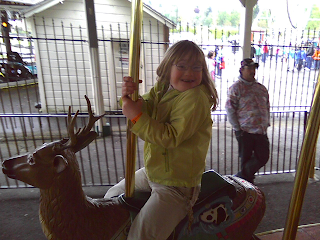 I spent the day as a chaperone for my favorite 5th grader at the end-of-year picnic at Oaks Park.  Students from at least two school districts who participated in Safety Patrol this year were invited, courtesy of the Elks Lodge.  The last time I was able to arrange to go on a field trip with her, it was 2nd grade and the destination was OMSI.  So it was definitely time.  I had to go through a whole new background check to be approved as a volunteer at her school.  (Doubtless as a private school teacher I am suspect; this is probably the same background check that allowed an unemployed welfare recipient who locked her autistic stepsons in a caged room to be a school volunteer... but I digress.)

Bus rides with 5th graders are a quieter and more orderly affair than I remember from my own elementary days.  The buses have emergency escapes in the roof, a "body fluid clean-up kit" up front right beside the first-aid kit, and the driver's name cheerfully written in front ("Ms. Jeannie").  All new since my day.

Initially we were grouped with a couple of boys, but it quickly became obvious that their taste in rides was a bit more adventurous than ours.  My daughter took one look at the ride called "Eruption" and decided to back out, in favor of the fast ferris wheel that rocks back and forth.  So, mildly-thrilling was pretty much our limit.  Personally, I don't like riding on any ride that can easily be packed up on a truck, for safety reasons.  And with a damaged inner-ear, I'm nearly incapable of feeling motion-sickness... an advantage when I need to prove my toughness to my teenage sons at Disneyland, but it makes it hard to tell when dear daughter may be having trouble.  But it worked out fine.  In fact, I had a hard time keeping up with her.  The one cell-phone picture I took was aboard the park's historic carousel.

Knitting -- I'm waiting for a good photo, but I finished another cardigan earlier this week.  I made 4 inches of progress on my new shawl today.  Quilting -- progress on the machine-quilting is measured in inches per day, but it is progressing.
Posted by Kathy at 7:38 PM