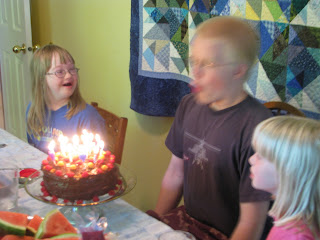 First, the movie:  The King's Speech is well worth seeing if you or someone you love has ever struggled with a speech impediment.  It's the first R-rated movie I've ever taken a child of mine to (my favorite 11th grader and fellow-blogger at Greeks2Geeks).  It deserves all the Oscar nominations.  A lot of the additional fun is playing "Where have I seen that actor before?"  And now I really loathe Edward the Abdicator.  If he was even half as despicable in real life as portrayed... ick.  So fun to see Helena Bonham Carter playing a nice girl... er, Queen... for a change.  And Timothy Spall as Churchill was brilliant.  But of course the heart of the movie is the unlikely friendship that develops between the King and his speech therapist.  Nicely done, all round.
Cautions: therapeutic profanity, royalty getting in touch with their feelings.
Of interest to: those who like to follow Who's Who among British actors, history buffs (are they one and the same, I wonder?)

On to books: I cannot say enough nice things about the No. 1 Ladies' Detective Agency series by Alexander McCall Smith.  They are beautifully written, gently humorous vignettes of life in Botswana, that highly favored of the countries of Africa, where life is simpler even when it's complicated.  I just finished reading Teatime for the Traditionally Built, in which Mma Ramotswe must say farewell to her beloved Tiny White Van, a main character in all the books up to this point; and her assistant Grace Makutsi must deal with the machinations of her man-stealing rival Violet Sephotho (who most decidedly did NOT achieve 97% on the final examinations at secretarial school).  Highly recommended, but the series is best read in order.

The Clutter Cure by Judi Culbertson is one of those helpful get-yourself-organized books that I always check out from the library around New Year's in my never-ending quest for better organization.  This one is better than the how-to types, though, because it actually addresses the emotional roots of clutter and hoarding and gives practical examples of the mental dialogue required before people can "let it go."

I just bought Alice Starmore's Book of Fair Isle Knitting (and I really should have bought it from Amazon because it's cheaper there even than at the bookstore with a $5 gift card) in hopes I can design my own sweater with the yarn I purchased last week.  While I realize that the purchase of this book and the yarn probably negates everything I learned in the previous book, I'm full of contradictions that way.

Finally, Letters from Pemberley is light, frothy and enjoyable, a short novel presented as a series of letters from Elizabeth Darcy to her sister Jane Bingley.  I'm not sure I really liked some of the cutesy touches that are meant to be homages (like the Daleys, thinly disguised versions of Emma and Mr. Knightley), but overall an entertaining read.  Nothing much happens, but sometimes, that's what we want from Austen fan-fiction.
Posted by Kathy at 4:32 PM