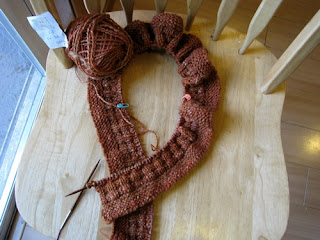 The challenge: complete Rhinebeck Goes Ravellenic before the end of closing ceremonies.  By complete: all knitting and seaming finished; buttons and blocking optional.  The materials: 22 skeins of orange superwash yarn, handspun during the Tour de Fleece, in 5 colorways: Classical Copper, Trademark Infringement Caution, Olympic Torch Flame, Bronze Age with Mycaenaean Patina, Ancient Embers.  I have about 1800 yards total of a worsted weight 3-ply.  The needles: size 6 KnitPicks Harmony tips on a 40" cable.  I went down a size because I'm generally a loose knitter and I'm trying to achieve an accurate 5 stitches/inch gauge to get the right amount of positive ease and not bagginess.

I managed about 2 inches of knitting and one skein of orange yarn (96 yards, colorway 145-copper/bronze/embers) before going to bed last night.  I'm on my second skein midway through the day (98 yards, colorway 345-flame/bronze/embers) and may finish about a skein a day.  It could happen!  When I did my 12 sweaters in 2009 challenge I used to aim for one inch of body knitting per day, which is roughly equivalent to 4 inches of sleeve knitting.  That can be hard to achieve with fingering or sport weight, but this is worsted and I think I can, I think I can.  Keep up the 2 inches per day pace, I mean.

Random observations: The Vatican did not field an Olympic team this year.  I don't know if they ever did, but it would make an interesting story.

My daughters had never watched Chariots of Fire, but now that they've seen Mr. Bean's version they may think it is the authentic one.

QEII as a Bond girl.  Now I've seen everything!

Great post. I hadn't realized that there are challenges happening with knitters. Plenty of quilting ones. I wish you the best with The Ravelympic, er, RAVELLENIC. You call the yarn orange. Is it really orange? It looks more like brown. It will be quite lovely I am sure. I am a knitter but I haven't picked up my needles for a couple of years. Currently my handwork is doing red work in the evenings. Well enjoy the knitting challenge and watching the Olympics.