Randomday after the Dark Night

Marie of A Miniature Clay Pot was in the movie theater with her two daughters in Aurora early yesterday morning.  They got out safe.  She writes beautifully about the goodness of God in this tragedy:

Don't get the two confused.

But what I think is most telling are the comments.  Obviously this is a woman who has tangled with the militant atheists before, and they are willing to politicize and personalize the event even if most politicians are not.  Accusations of selfishness because she and her daughters ran to safety.  The assumption that a prayer that she doesn't even remember must have been selfish too.  Berating her for not calling 911 after she got out of the theater, or going back in to carry others out. (What, now Christians have to all be first responders too?)  Scolding her for commenting on how she and her daughters are feeling -- too inconsiderate of those who died?  She does an admirable job again, responding to the responses.  But what is it about atheists that writing a nastygram is their first response to a tragedy?

Petra Anderson is recovering well after being shot multiple times.  Her sister has set up a Facebook page.  It is a surreal feeling to realize this little girl, one who used to play Red Light Green Light with Daniel, has grown into a beautiful young woman whose life has just been so cruelly disrupted.

Okay, I need to do some lighthearted random stuff now.

Forget the U.S. Olympic Committee and the Ravelympics -- have you heard about the Creation Museum's discovery that the Smithsonian Institution stole a picture of its dinosaur?  Now that is not only a copyright infringement, but a big embarassment.  I wonder how many heads will roll at the Smithsonian?

While watching Tour de France coverage from UK commentators, I learned that St. Swithin's day, July 15, is used as a sort of predictor of weather patterns for the rest of the summer.  And it was raining her on July 15, and we've had a very... British summer here in the Northwest.  I'm hoping for a few warm days.  Today was one of them, but we've had a lot of dampness and misty cool rainy days.  I know the rest of the country is suffering from drought and heat waves, but I personally feel like our summer hasn't even begun yet, and it's more than half over.  The plums are still sour on the tree.

The New York Times had a fascinating article on the bleak future of liberal Christianity last week.  Regular attendance at the Episcopal Church has dropped an average of 23% over the last decade.  This wouldn't be such a remarkable article, if it weren't coming from the New York Times.

Have you ever pondered the irony of John Shelby Spong and R.C. Sproul being shelf-mates in the religion section of the bookstore? 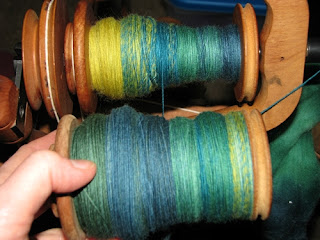 The Tour de Fleece is almost over.  I won't be spinning cat anytime again soon, and I'm almost done with the final sprint.  I still need to do a finish line photo, and it would be nice to finish the cop on my Kuchulu spindle. 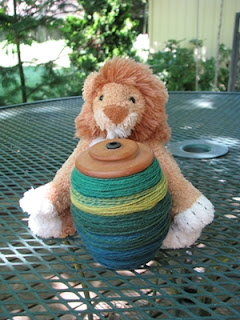 I've decided the lion mascot's name is Bradley, after Bradley Wiggins, who is almost certain to win the Tour de France unless something goes south in a major way.  Bradley even has sideburns like his namesake.

Speaking of whom... what if Wiggins is not his real name?

Source: google.com via Katherine on Pinterest
What if he's a long-lost Weasley sibling?  We always thought Fred and George were twins... what if they were actually triplets?  Probably not... Bradley is way too serious.  But you have to admit, there is a resemblance.
Posted by Kathy at 7:43 PM