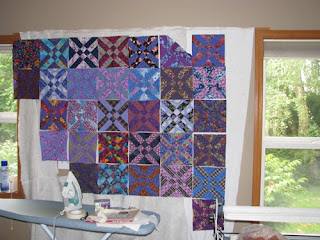 On the design wall, nothing has changed since last week.  I've been almost exclusively focusing on spinning, with a little knitting during swim lessons.  No quilting, not even a stitch on the arrowheads blocks.  But the parts for the Grace Frame have arrived and I am trying to get them uncurled.  Once they are a little more relaxed (and I am too), and I have some heavy-lifting help from Steve or Daniel, I'll try to put them on, reassemble the Megaquilter, and get some machine quilting done.  I'll probably also need to buy thread.  I have big ambitions to get Jack's Chain, Orca Bay, and Farmer's Wife all quilted this summer.  But you know, summer is always too short!

The Tour de Fleece is speeding by, and I have spun up about half of the orange superwash for my second Rhinebeck sweater.  I'm washing the 10 skeins I have today and hanging them out on the line to dry.  After plying the yarn and measuring it off, you are supposed to "set" the twist by soaking or washing it gently, then giving the skein a few good thwacks against something hard, like the edge of the sink.  This seems to shock the wool fibers into good behavior for some reason, and any extra twist in the yarn from over-spinning or over-plying goes away. 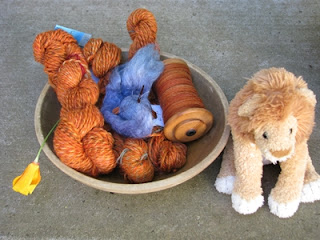 I noticed that in the Tour de France, they present the winner of the Maillot Jaune with a bouquet of yellow roses and a stuffed lion.  It just so happens that this little stuffed lion was in the bag of things from the girls' room that were supposed to go to Goodwill.  So I appropriated him as my mascot.  Now I don't know if he'll end up at Goodwill or not! 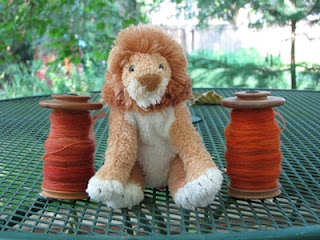 Of the 10 skeins so far, each one a different permutation of 3 different plies (there are 5 dyelots total, so I marked the skeins "123, 124, 125, 134, 135, 145, 234, 235, 245, 345".  Now, in my attempt to make every skein different, I'm going to ply 2 strands of the same dyelot with 1 strand of a second; I won't have enough to try every possible combination, but that's probably just as well.  I really like dyelot 1 on the left of Aslan: it's a rich reddish copper that I'd be happy with if I had reproduced every time.  But I also like dyelot 3 on his right -- a very saturated orange with red mixed in.  The other dyelots have pluses and minuses; 2 can be a little too tangerine, 4 a little too brown or incompletely saturated, and 5 has a definite black/gray cast.  But combined in various ways they definitely make a yarn with continuous interest.  I'm looking forward to making the sweater during the Ravelympics!

The Great Redwall Race of 2012 -- The short story: earlier this spring Daniel challenged Quarta to a chronological read-through of all the Redwall books that she hadn't yet read or had read to her.  He was supposed to read them all, not skipping any.  Well, he's backed out in favor of re-reading the Belgariad, but Quarta has finally caught on that these books are a great thing.  She whined a lot at first, but patience and good children's literature won the day and she's working on The Long Patrol now.  Here's the chronological list we're going from.

If you haven't yet experienced the Redwall books, what in the world are you waiting for? If there's a child in your life, that child needs a bedtime story like these.  You can start with Redwall itself or with Mossflower, but why not join us with Lord Brocktree and experience from the very beginning the panoramic sweep of the grand tale of the goodbeasts who must fight for freedom against vermin hordes?  Join Dorothea Duckfontein Dillworthy, Dotti for short, that young haremaid of Fatal Beauty, along with Lord Brocktree the badger, questing for Salamandastron, the fabled mountain ruled by an ancient line of noble badgers.  Other beasts, moles, shrews, mice, otters, and squirrels help them along their way.  There is always good food, gentle humor, positive character development, and a clear delineation between good and evil.  In this book, the evil role is taken by Ungatt Trunn, a wildcat with an unnatural liking for spiders and world domination.  He conquers Salamandastron and Our Heroes must raise an army to win it back.  Thanks to teamwork and self-sacrifice, and helped a bit by the tendency of the evil hordes to turn on each other, they will ultimately be victorious and provide a stirring tale for young creatures to hear after the feast.

If it sounds familiar, it is basically the same plot in every novel.  And there is absolutely nothing wrong with that.  Tune in for more book reviews in the Redwall race as the summer progresses.
Posted by Kathy at 5:50 PM