It's Randomday again, when I attempt to make a blog post out of chaos. 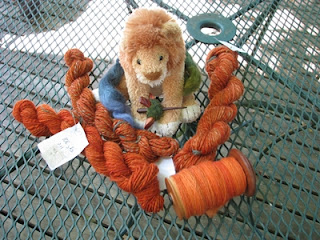 In the Tour de Fleece, the days are starting to blur together in a swirl of orange.  This was Wednesday's spinning and plying. 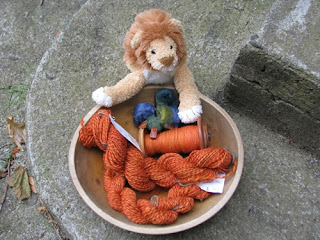 This was Thursday's.  I'm plying two like strands with one unlike strand for all these skeins, and have used up 1 of my 5 colorways.  I'm coming up with names for the colorways like 1: Classical Era Copper, 2: Trademark Infringement Caution, 3: Olympic Torch Flame, 4: Bronze Age (with Mycenean Patina), 5: Ancient Embers. 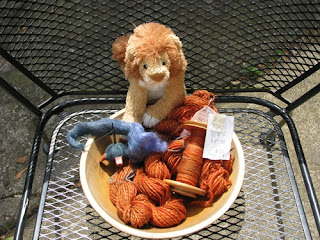 And this was yesterday's.    Over the three photos you can see the progress on the little Kuchulu.  I was spinning parrot green Wednesday but now am well into peacock blue, moving towards cornflower.  Another two days of spinning might finish up all the orange and let me do something else with my wheel and its 7 bobbins.

I really enjoyed this Counterfeit Gospels Game on the Honey and Locusts blog.

Today I had a fall.  I lost my balance while painting on a stepladder and fell backwards.  Amazingly, I did not spill the can of primer I was holding.  It gave me a flashback to last summer when I fell while holding a glass aquarium and didn't break the glass.  Fortunately this time I didn't need medical attention afterwards.  But I've decided that we need all new painting equipment after painting the house last summer: stepladder included.  It's just too wobbly to be safe anymore, especially for me with my vertigo.  The girls' room is back to normal after the drywall repair; the living room has been primed at least.

Why would there be two people in human history with the name Engelbert Humperdinck?

Marathon spinning during the Tour isn't really possible for me; I've taken my wheel to Starbucks twice, and outside on the back deck about 3 times, but most of my spinning is done while watching/listening to TV in the evenings.  I'll then take the daily photo in sunlight the next morning.  Yesterday I was so drained after taking 8 separate trips with our 2 teenage drivers (4 round trips, I supervised two and Steve supervised two while I was in the back, which might be harder) that I didn't even care that there wasn't an episode or two of Hell's Kitchen to watch.  I sat and spun while the Fox News Channel wound through half of Hannity, Greta Van Susteren, and into The Five before feeling I was unwound enough to even attempt sleep.  When I'm accompanying a student driver, my right leg is almost constantly pressed against a nonexistent brake on the passenger side.  Why do you think that is?

From The Five, who were kinda punchy last night:  George W. Bush cannot be both an idiot and an evil genius.  Mitt Romney cannot be both an out-of-touch rich guy and a macchiavellian schemer.  The Obama campaign has apparently branded something that Mitt Romney never did but that they'd like people to think he did a "felony."  I'm still not clear on what the "felony" was supposed to be, but here's what it was not: arming Mexican drug cartels.

I like the Fox News channel coverage just fine, but I could certainly do without the Cialis and prostate ads.  Really, do they think women don't watch the news?  And that we don't get disgusted by the sight of 20-year-younger women gazing adoringly up at their "distinguished" partners?  Or the old men bragging about how they can now sleep through the night, as if they were just emerging from infancy.  Why can't there be some ads for ordinary things that everyone consumes... like, I don't know, potatoes or shoes?  You'd think I'd wandered into the spam folder of my email program, only all the ads were in English.  I wish they had spam filters for television ads.

It occurs to me that the Tour de Fleece combined with the political season would be prime time to spin some Romney .  And I don't know if any political cartoonists are even aware of the fact that there is a breed of sheep named Romney, but I think Romney the candidate has a sheep-like face that really is calling out for someone to take advantage of that connection.  You heard it here first.
Posted by Kathy at 2:57 PM