Summer tends to run away from us. There have been several instances of family movie night: this was Nine Lives. Muffball was disdainful of any screen portrayals of cats that were not her. 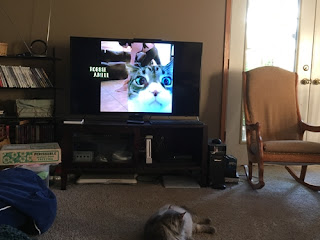 Youngest child Quarta is now Fifteen. I Am Thai is a great restaurant, whether your occasion is "early birthday" or "I don't want to cook tonight." 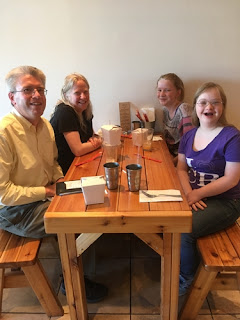 This series of photos was the result of my instructions: "look happy and dignified." 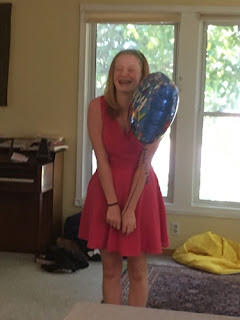 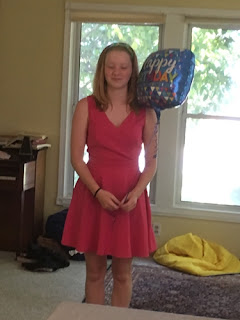 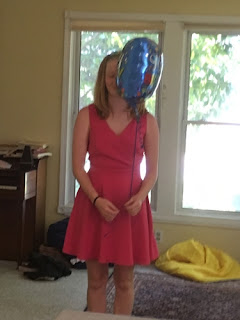 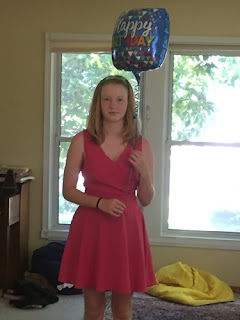 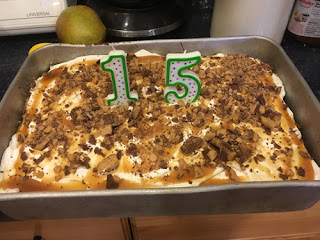 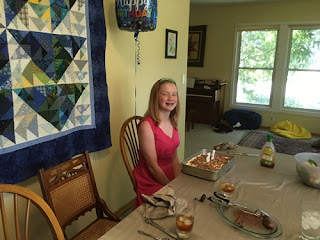 The county fair, as it looked when I dropped off the Farmer's Wife Quilt two days before opening. I have always said I don't want to go on any ride that is delivered by a truck. 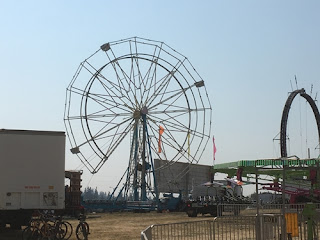 I discovered by chance, while looking through quilt books, that Tertia was awarded the Elder Wand for good conduct at school back in June. This seems like a dangerous precedent, but so far no Death Eaters have dogged our steps, and she is the first Hufflepuff, to my knowledge, to gain this distinction. 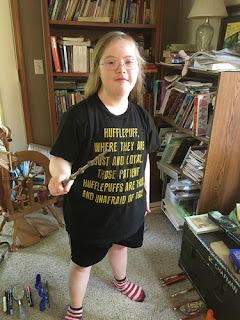 We have had some record-breaking temperatures this summer, and last week we enjoyed this idyllic afternoon at the Washougal River with some friends who own property there. 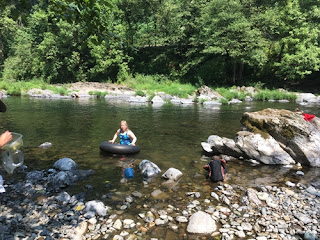 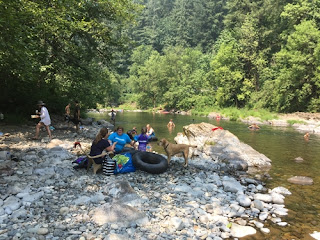 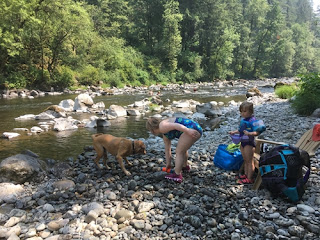 The dog, Argos, was the sweetest ever, playing the fetch game with Tertia, dropping and rolling the toy to her over and over, and pointing at it if she was slow to pick it up. 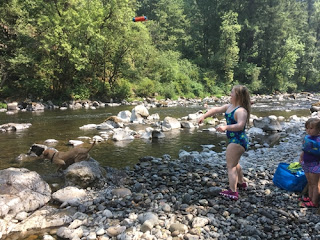 The Farmer's Wife Quilt won a red ribbon, which seems to be the best I can get out of the quilt cabal at the fair, and is in a place of prominence. To its right is a 50-state star quilt made by a lady who was in my informal beginner's quilt class more than 10 years ago. It was so nice to bump into her again and see her still going strong! 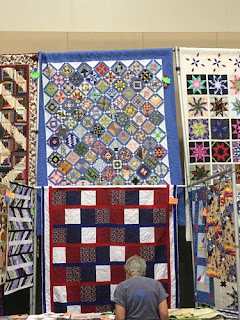 Plum season is in full swing, after a slow start because of the cold winter and spring. I can always pull up my plum recipes by the tag "plums." I'm not picking quite as diligently because the tree is so much taller now. There are a lot of bugs around too. But we have one dehydrator load almost finished and enough to start another, and even though we have some still in the freezer from 2 years ago, I should get busy and make pflaumenmus and plum jam and freeze a few bags at least. I don't think I'm up for picking hundreds of pounds to donate to the food bank but if anyone wants to come, they are welcome to pick for themselves. 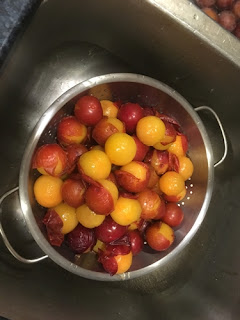 This is what plums look like when they are dropped in boiling water for a few seconds, then drained. The skins slip off easily, leaving what I used to tell the boys were "elephant eyeballs." They never believed me! But then you can puree the plums after the seeds are removed and use the puree for plum leather in the dehydrator. It has been a long time since I did this, witness the fact that the girls were ignorant of the "elephant eyeballs" thing. So we'll see whether the plum leather is worth it.

This has been kind of an extended Randomday, trying to catch up with neglected blogging. I'll have more, including knitting, next time, but it's already a fairly picture-heavy post.
Posted by Kathy at 4:33 PM