Randomness by the Bucket

I really like doing my "randomday" posts on Saturdays. Trouble is, that hasn't been happening regularly enough to keep up with all the randomness. We get it Costco super-sized around here, and I haven't been keeping up. But in the blogging world, you kind of have to keep up. so here's my try. 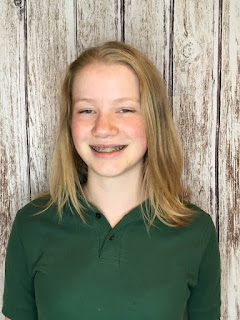 Quarta, 14, played Anne of Green Gables in the matinee performance a little over a week ago. This was the before picture, taken the Friday before the performance. 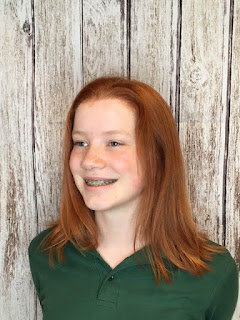 And the after picture. It's a semi-permanent color, which means it will (probably, on a blonde) gradually fade. I'm unfamiliar with this whole world of hair coloring, but judging from the reactions of complete strangers as well as those who know her, she makes a stunning redhead and should consider being a redhead longer. I'm not sure how I feel about that. I might have to try being a redhead myself, since I have the same skin coloring. Also, the performance went very well. She had worked very hard on all her lines, but seeing the performance, she also nailed the vulnerability and sensitivity that Anne needs to have. And of course I'm not biased or anything! I was sad there was only the one performance for her (another cast was involved in the two evening performances. But it was also a relief to have the play and all the time requirements over. 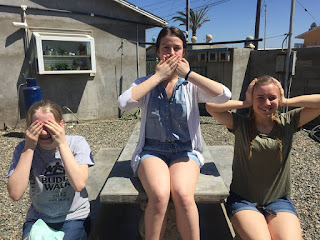 This Mexico pic of the "3 monkeys" also features Quarta. Too fun! 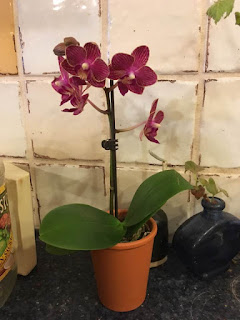 A day or two after Easter I discovered this orchid for $3.99 at Grocery Outlet. I have since been mildly obsessing over orchid care, and I went back twice to buy more. There's a white one and 4 others that have been damaged and I am trying to nurse back to health.

There ends the positive randomness of the past few weeks. Last Tuesday evening we experienced a plumbing catastrophe when water suddenly started cascading out of the downstairs toilet. It was warm water, from the upstairs shower. Eventually as Steve and I were bailing and plunging and collecting every rag in the house to mop up the mess, it occurred to us that this was bigger than a plunger problem. And sure enough, thanks to Mr. Rooter 24-7 emergency plumbing service, it was confirmed: some as-yet-unidentified tree root had likely obstructed our sewer line. So no flushing or using drains all Tuesday night and most of Wednesday, and they had the rooter trucks with their high-powered jets at work.

We were really happy to discover (which we couldn't find at 10:00 Tuesday night) that there was an exterior clean-out access for the sewer line. It had been hidden beneath some landscaping fabric and behind bushes. There appears to be only one section of pipe that will need to be replaced. That is another appointment with another evaluator this coming Wednesday. We are at least functional in the meantime. Water damage experts highly recommend tearing out all the flooring, subflooring and some of the drywall in the bathroom to get rid of bacteria growth. We're kind of waiting to see how much we're in for on the pipe replacement, and since it's a tree root, there's little chance that homeowners' insurance will cover it.

We had water running through the floorboards into the basement as well: less worry there, but we did dispose of several decades' worth of National Geographics that suddenly became a whole lot less appealing to keep storing. Daniel's wine bottles were also near the line of fire, but the only damage there was to some of the labels.

Actually, looking back at nearly 18 years in this house, it's pretty amazing we haven't had a serious plumbing setback before this. I just wish money grew on some of those trees with the roots. Because I made a list of all the other things we need to spend money on before this plumbing incident happened, and we're nowhere near the halfway point yet. New washer and dryer are definitely looming.

Ah well. On Saturday I went to a Special Mom's breakfast which was a great experience and we are hoping to meet more regularly to strategize as to how to support our children as they become adults. Then I went on to Cedar Tree, where the Latin Olympika was being held. I was able to be scorekeeper for the very exciting final rounds (and I had written the Level 1 Certamen, and had to run out to the car to fetch some extra bonus questions at the very end!) Tertia spent Saturday with the Horticulture class, working at their plant sale. She was rewarded with "plant bucks" and so our garden will be the richer for her experience. Peter also made a fly-by visit home this weekend, before his finals and summer job.

I'm making some progress on sock knitting -- still no sweater knitting going on -- and quilting. The APQquiltalong from years back, the low-tone Burgoyne Surrounded, is almost a complete top, and I have started a quilt I have been planning for even longer than that, but no pictures yet. And the Farmer's Wife quilt is on my bed and is being enjoyed.

I'm thinking of writing a story about a post-apocalyptic world, where the plumbers rule. It would be totally believable. I already have the Latin short-short story version of our current situation: cloaca obstructa, pecunia maxima. (Blocked sewer, big money).
Posted by Kathy at 8:05 PM