I can't seem to resist the annual ritual of the Bonnie K. Hunter mystery quilt. Even though I shouldn't, I found myself diving into it last Friday, along with several hundred others probably. Today we're linking up to the Quiltville blog to see other people's progress and cheer each other on. 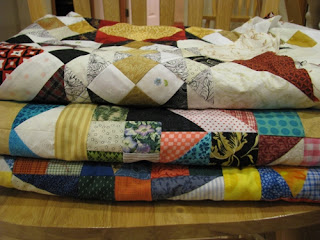 This is why I "shouldn't" be participating: I haven't quilted since the early spring, the last three years' mystery quilts are not quilted, and last year's still needs the borders put on. From bottom to top, Celtic Solstice, Grand Illusion, and Allietare... proving that the annual mystery quilt is just as much a part of my holiday season as finding recipes for leftover turkey. Maybe it's the primal urge to organize and rethink one's life before the new year, maybe it's my way of avoiding holiday stress and putting off real cleaning...I don't know... but Friday morning, I woke up and thought, hmm, better check out what the first clue of the mystery quilt is, and Friday afternoon I was finishing up some flannel baby quilts last touched in the spring and pulling boxes of colors from my stash cabinet. Remember the shave-and-a-haircut scene from "Who Framed Roger Rabbit?" "Toons, it gets them every time." I'm like that with the mystery quilt. 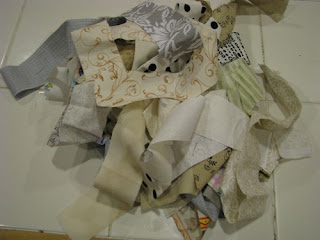 2" Bits! I decided to play with the boundaries of neutrality... I've seen Bonnie use a fairly loose interpretation of what a "neutral" is, and so, as I worked with mine, I tried to find a way to include some fabrics I wouldn't normally. This is a selection of pretty sedate, party-line neutrals in the above 4-patches. I thought the pink dots were a bit daring at first, but looking at this grouping, I feel like, if I just used this range, I might get bored. I don't like being bored. 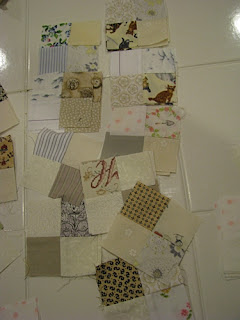 So here, I have one "nonconformist" patch in every 4-patch. I think of them as independent voters. They keep things interesting. They may have some unorthodox color, or an unexpected pattern, or be a little darker than the typical cream, but they're probably fine. 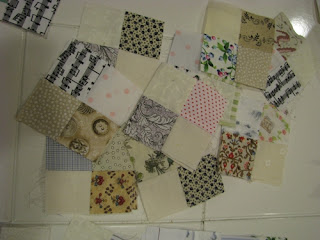 Here's a selection of ones that have 2 of the 4 patches as nonconformists. If I wasn't sure, I held them against the first "boring" group and saw which ones jumped out at me. This is kind of like the closely-contested states: people are polarized and fight against each other, but they're all part of the same American quilt and they're gonna have to figure out how to get along somehow. I included some fabrics that are very pretty and garden-like in themselves, and kind of remind me of the South of France, but I'm not sure how well they will play with the rest of the colors in the quilt. Maybe in moderation they will be fine; maybe I'll make a bunch extra and decide when I'm putting the quilt together later on. 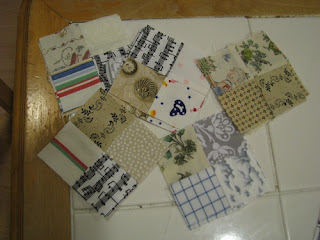 Here are the anarchists and rioters (but in a neutral way): 3 or 4 patches are kind of "in your face." BUT, if all my 4-patches were this radical, maybe a revolution would happen and the first group would seem to be the outliers. I don't know. I could go on polling my scraps forever and come up with different combinations every time. For now, I'm just enjoying playing in my scraps again. Technically, I'm more than a third of the way done with this clue, and I've made very good progress on the flannel baby quilt project. I'll try to add the borders to Allietare soon. It's all good.

Love the way your 4-patches get wilder as your post continues! Hope you can get them all living together peacefully, and avoid a revolution.

What a great process! I too make more fourpatches than needed because i am not abel to decide if they shall be calm and pale or with more color and beige. We can always use the leftovers for another project.

Beautiful variety of fabrics you have!