"Vote Your Conscience" and other Radical Notions 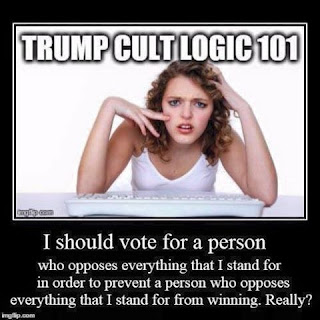 "Vote your conscience" is now, apparently, the most radical and un-American thing a Republican can say; at least according to the Trumpists who are hoppin' mad about the speech truthtellin' Ted Cruz gave last night. It's also precisely the reason I've supported Republicans for the last forty years. I wasn't old enough to vote in the '76 election, but rooted for Ford, then Reagan and every Republican nominee for president since him, until this year. And the reason was conscience: specifically, the Republican Party offered a home for those opposed, by conscience, to killing unborn babies (how can that even be a controversial position, I always wonder), and continues to do so while they are frozen out of the Democratic party.  I'm still a functional Republican, I suppose, until a viable option for conservatives materializes, and will support Republicans in local and statewide races; my party has just been hijacked by forces beyond my control, and they've sold my email address. I have been obligated to report as spam the fundraising appeals that have started to come in from Donald Trump and Ivanka Trump. So first off, let's get rid of the "no true Republican" fallacy and the "either-or" fallacy that are being thrown around so much. Forty years is twice as long as Donald Trump has been a Republican, and almost three times as long as the longest of his three marriages. And Hillary Clinton has already won the election, barring a completely unforeseen twist between now and November: she won when Trump won the nomination, and I don't think there's anything I can do about it, except vote my conscience. Certainly, she'll win in Washington State, where I didn't even have the option of voting for anyone in the primary who hadn't already dropped out of the race.

I've never been the biggest supporter of Ted Cruz: he strikes me as a little too divisive and a bit fakey in his speaking style, and I still don't think he could really unite the country enough to win the actual presidency. All of that is exponentially more true of my concerns about Trump. But in any case, Cruz gave a principled speech, locked into the convention corner as he was, and it didn't deserve boos. Not in America, where we know about conscience. Not from Republicans, who have defended conscience rights from the beginning. Here's the text of that speech. And indications are that Trump orchestrated the response just from spite and narcissism, when a truly gracious winner would have ignored it and accepted the decent spirit behind it. After tonight, the controlled environment of the RNC convention is gone, and any chance for Trump to unite the party along with it. What does it say that Trump never attempted to mend fences with John Kasich, the governor of the state hosting his convention? What does it say that Bob Dole (election cycle of 1996, 20 years ago) is the only living Republican presidential nominee to support Trump? To me, it says that most party leadership is going through the motions, doing the decent thing as they see it, knowing they've already lost. It also doesn't lay to rest the nagging worry that Trump is fundamentally a liberal saboteur whose intent is to hand the election to Hillary. It's probably not true, but can we trust him?

I have a great deal of respect for Mike Pence, and I think he was a good choice for VP. If the ticket was Pence/Trump instead of the other way around, I think I could vote for him, As it is, I doubt Trump would be a micro-managing president if elected, and I can't fault people who vote for the ticket in hopes that he would delegate the real policy work to decent people. But more likely, I think Pence will be the scapegoat who gets the blame when the Trump campaign goes down in flames. I've seen that before, too.

It comes down to another c-word, character. Bill Clinton was president for 8 years, and we objected to his character then. But he at least was ashamed of his lapses. Trump has bragged about his indiscretions, and never apologizes for anything. The never-Trump movement still has a point. More so now, as people become more informed about his foreign policy, which strikes me as truly disturbing.

As I've been musing about the election cycle and the lack of good candidates, I keep coming back to the thought that, even as I feel disenfranchised and shut out of the process, historically, you had to live with the king or emperor you had for life. We have a system that limits the damage even a terrible president can do: four years, maybe eight, and two other branches of government leaning on you the whole time. And we have a choice. We can vote our conscience. We can take character into account. It's America. We can vote for whoever we want.