This will be the herb edition, starting with lots of mint. Semper Mentha! As I mentioned in Part 1, my primary philosophy of gardening is to plant nice weeds and step back. I plan to have a more well-rounded herb garden eventually, but for starting out it's always a plus if the herb has an invasive growth habit. 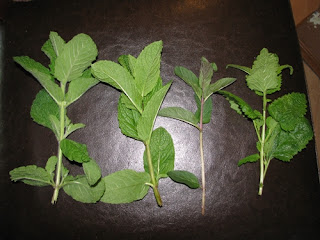 From earlier this month, l-r: Apple Mint, Spearmint, Chocolate Mint(?), Lemon Balm. I researched the mints and their larger family, lamiaceae, lest you think I'm making this up about invasive growth habits. The Force is strong with this family; almost all of our longest-established herbs are part of it, including the long row of mints up against the back fence. Over the years, they have grown together and I'm not sure if there's any Peppermint left. So we're attempting to weed them back to a modest and more clearly defined patch for each variety. 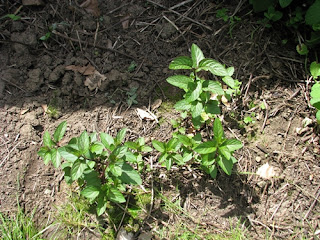 Chocolate Mint seems to be easily overwhelmed by the other mint cousins. I found this patch and pulled out all the Apple Mint around it. Chocolate Mint is a hybrid of Peppermint (mentha piperita). 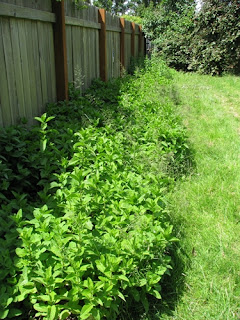 Here's the long view of the fence, starting just after the Chocolate Mint; it's mostly spearmint (mentha spicata) in the immediate foreground; that's the legendary plum tree in the background. 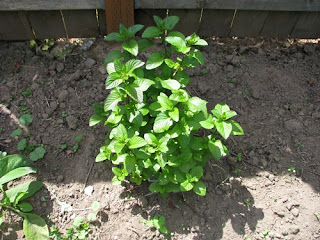 Orange Mint... we had some years ago planted in a different spot but it died out, proving that mint doesn't always invade. This was bought this spring, and we planted it where we had cleared out some Apple Mint.  Orange Mint is also a variety of Peppermint. I am not at all sure that we have any true Peppermint left in the mint bed, and so we may need to buy some of that too. 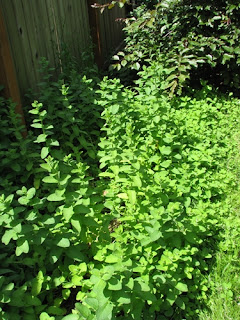 By far the dominant mint, with the most invasive growth habit, is Apple Mint (mentha suaveolens). It's fuzzy, and not quite as strong-smelling as the other varieties. It's nice enough, but it's the variety we've been weeding out the most lately. We've been making plenty of mint tea. 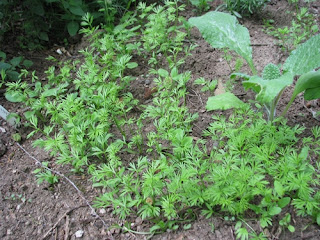 Moving on to the L-shaped brick raised bed, which I have been thinking of as an herb garden for many years; this is the year I'm really trying! I planted a packet of Cumin seed here; I've never tried growing this herb before. It's a member of the Apiaceae family, which also includes carrots, parsley, celery, lovage, dill, fennel, cilantro and caraway. I am letting the broad-leafed plant grow because I think it might be Borage, reseeded from a previous year. The hydra-headed bindweed is a real problem in this bed, but I am going after it regularly and it's less discouraging than in the past. 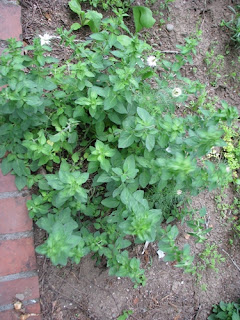 Oregano, another member of the mint family, is naturalized throughout our yard. This may be close to where we originally planted it, but it is quite literally all over. It's at least a good-flavored variety. 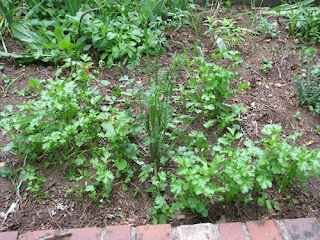 I planted two Cilantro plants and sowed two beds of seed around them; so far so good. 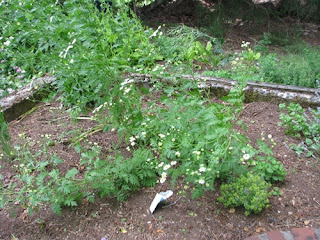 Here's a gift from the VP's garden last year; Feverfew. I had no idea it would get so tall. It's already overshadowing the Lemon Thyme I planted this year. 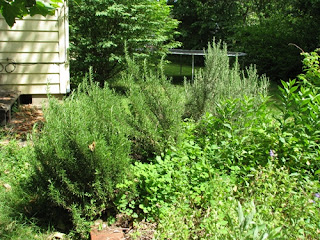 Two well-established Rosemary bushes; my long-term plan is to thin out virtually everything else around them and put in some more herbs, but the wild phlox and daisies and other unidentified plants need to be pulled out. 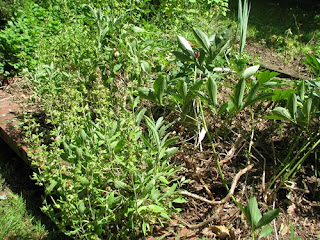 When I planted this sage 17 years ago, I did not know there was a peony almost right under it because it was late in the season. There might be two inches separating them. I want to grow more sage and thyme if I can. I didn't get a picture of the parsley, basil, marjoram, chives, dill, pineapple sage, lemon verbena or fennel. I'd like to relocate my lovage from its current location by the back door. I'd also sometime like to try savory and caraway. 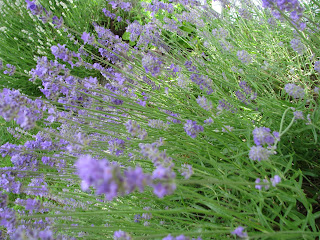 Closing with a picture of lavender because it's so pretty, and one of my favorites. I toy with the idea of getting a still to distill my own essential oils; it probably would not be cost-effective though. But with multiple lavender, rosemary, mint varieties and lemon balm, it might be fun to try.
Posted by Kathy at 7:33 PM

Be sure to grow lemon thyme. It is nice in cole slaw. I had to find it as a plant at a garden center In New Mexico. It wintered over there.