We are Back to the Random

Well, it was certainly a lovely trip last weekend, and I am so glad life contains some of these glorious moments.  To see people I haven't seen for 25 years, or 10 years... to sing ethereally beautiful music with them and honor nobility of character; these are not privileges granted on a daily basis.  Daily life, in my house, is far more mundane... and so I observe Randomday.

Topping the random events list of the week: on Tuesday I apparently cracked my lower left molar while eating some banana crunch cereal for breakfast.  A little bit of silver filling fell into my mouth on Thursday, and when I went to the dentist for a check on Friday, she said she could see the crack, that I would eventually need a crown, that I should wait for a few weeks to see if it will "calm down" on its own before committing to such a venture, and that the piece of filling apparently came from another tooth.  Since she obligingly pointed that tooth out to me, it has started aching too. 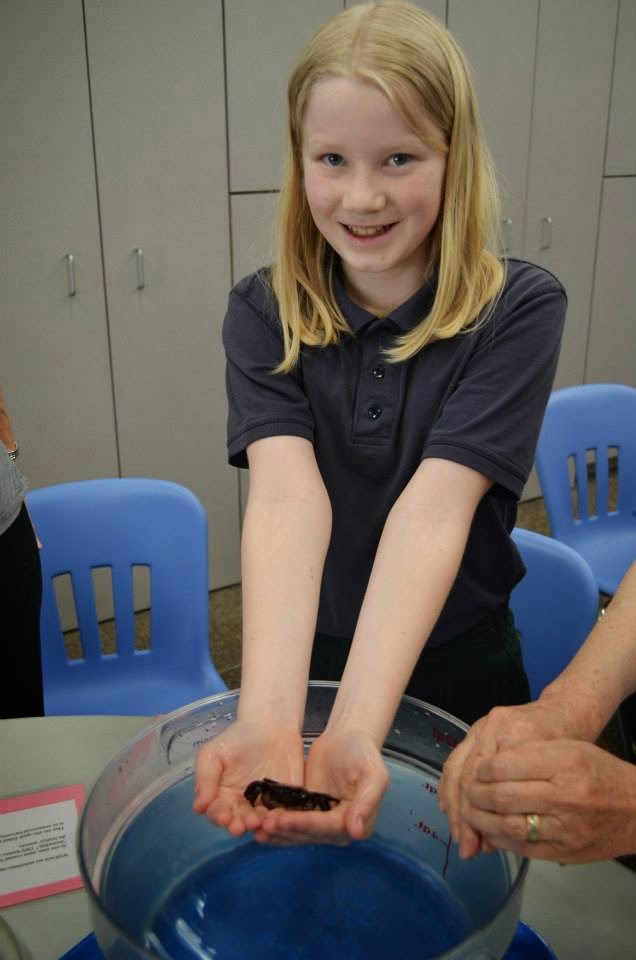 Quarta had a field trip last week too, with the 5th and 6th grade classes going to Oregon on an overnight trip to do aquarium stuff. I love this picture of her and the crab. It was more than a week ago, but Tertia wanted to make sure I took a photo of the silly face she made on her tortilla.  She finally decided what to spend her Christmas stocking money on: Lego Harry Potter game (years 5-7), a Tintin game, and the video of Frozen.

Peter had a busy week: Junior Thesis final draft due and Spring Protocol event on Friday, and then the SAT today.  He is celebrating being done by heading out to the Nike employee's store with some friends rather than doing the sweeping of the kitchen floor, which is his chore this week and sadly needs to be done.  The cat (Bilbo, the same one who clawed me in the face right before my reunion when I was trying to encourage him to go outside) was a little too eager to go out of Peter's window this week, and knocked the screen out, breaking the frame.  Steve is on his way to try to order a new one.

We've been doing a lot of the "This Old House" purchasing this week, actually.  A "custom control knob" for the stove had to be ordered from Jenn-Air, and a couple of plastic parts for the dishwasher, a water filter for the fridge and a furnace filter.  We've had temperatures from the 80's to the 40's and everything in between.  Steve has been doing a lot of gardening when he can.

I had a bucketful of grading to catch up on this week.  I took to playing Netflix on my Kindle while marking the Lingua Angelica worksheets and quizzes.  As I recall, it was 2 episodes of West Wing on Wednesday, 1 West Wing and the pilot of Lost on Thursday, and 2 West Wings and the pilot of the Office on Friday, plus a few hours of theoretically quiet time to do data entry.  Sixth grade recently completed the Stabat Mater, 7th grade is 1/3 done with the Dies Irae, which I am dividing into three parts this year, and 8th grade is in theory chugging away at the Nicene Creed.  I believe these are very beneficial exercises for them to do, but there is no denying that they are supremely tedious to grade.  So if I have to defy Neil Postman a little to get through it, I am more than willing to do that.

I have made it past the 1500 word level on DuoLingo's Italian course, and have set myself the goal of completing the Italian "tree" by the end of the month.  It should be do-able, since I only have 8 skills left to learn.  I've started dabbling with the immersion/translation interface online, but I'm not completely sure how it works.  But in any case, I'm ready for my Roman Holiday anytime now.  After Italian I plan to test out of as much French as possible and pick up German and maybe Spanish before Russian or Dutch is released in Beta.

It has been more than 4 months of 2014, and I have still not completed any quilting or knitting projects.  I wound and washed some reclaimed yarn today, and I have been sewing on Celtic Solstice.  Maybe the great craft famine of 2014 is coming to an end?  But not very fast.  I'm still feeling like falling asleep about 8:30 every night.