There are a lot of minor holidays in mid-March.  Yesterday was Pi Day, today of course is the Ides of March.  And apparently, it's also National Quilting Day.  Monday is St. Patrick's Day.  And there is a lot of tyranny of the urgent stuff going on in March.  Special school events, the end of the 3rd Quarter, parent-teacher conferences, special social events.  It's enough to exhaust anyone.  So let's celebrate some randomness instead. 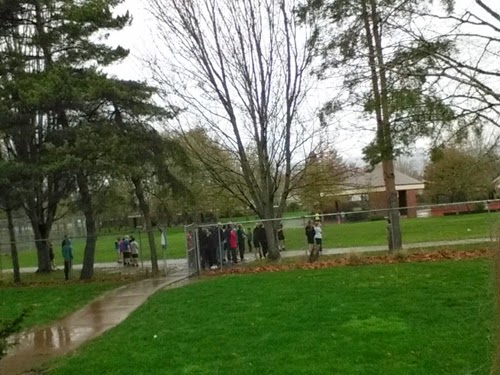 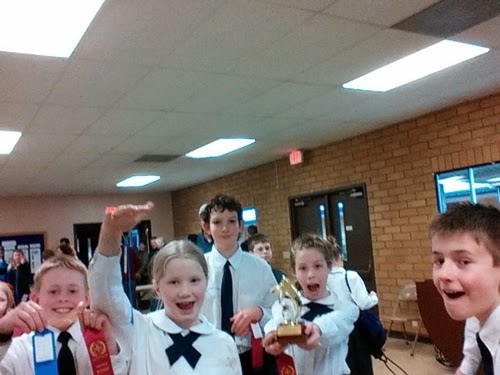 A random, unposed picture of students with a selection of awards. 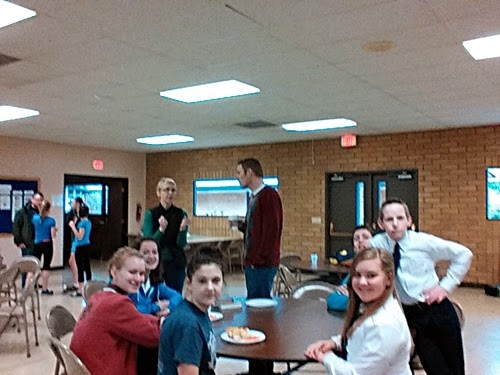 Older students waiting for the excitement to begin.

That's it!  I was too busy otherwise moderating, scorekeeping and driving all over Oregon and Washington.

Today instead of an all-day event I hit a few stores and found some winter coats for Quarta at a resale boutique, to replace the one she's worn to shreds.  I took the girls to the library.  Secundus surfaced briefly between sleepover last night, work this afternoon and another party this evening.  I will attempt to make a plum pie for dinner tomorrow so we can satisfy the unwritten law that says I must make a pie to celebrate Pi Day.

I didn't have to give or grade quizzes this week because of the National Latin Exam, but next week will be a doozy.  We have a new web-based grade program, "School Speak" (sounds Orwellian, doesn't it?) which is replacing the old familiar Gradekeeper.  I understand that if you like your Gradekeeper you can keep your Gradekeeper... at least until the end of the year.

Steve and I watched "Populaire" on Netflix last night.  It's a French movie with subtitles, modern but set in the 1950's.  There's this really intense competition to win a speed typing contest.  It was cute, but I know the description sounds weird.

This week I figured out how to use an app approved by the local library to borrow, download and listen to audiobooks on my Kindle Fire.  This is in addition to the ability to use a different app to borrow e-books, which I figured out 2 months ago.  Loving the ability to use the library in this new way.  The first audiobook I'm listening to is Brandon Sanderson's Elantris.  Daniel and I actually went down to Powell's books in Beaverton recently when he was back here on break to hear Sanderson at a book signing.  I have only read one book of his so far (The Rithmatist) and he is the kind of author that an audiobook helps me get into.  The audiobook narration does the difficult part to bridge over my natural ADD at the setup of the story, and by the time a few chapters are done and I've driven my commute once round trip, I'm hooked on the story.

Some fun quotes have come up on the Cryptograms game I've been playing lately.

"The car has become a secular sanctuary for the individual, his shrine to the self, his mobile Walden Pond."
— Edward McDonagh

This one inspired me -- I had really been thinking that our minivan needs a name.  Why not "Walden?"

"Never stay up on the barren heights of cleverness, but come down into the green valleys of silliness."
— Ludwig Wittgenstein

"Anyone who has passed through the regular gradations of a classical education, and is not made a fool by it, may consider himself as having had a very narrow escape. "

"All my best thoughts were stolen by the ancients."