I've been thinking a lot about socks in the weeks since the Unfortunate Incident of the Felted Socks.  What yarns work best and hold up to long wear; what techniques make the making of socks the smoothest and most enjoyable; which patterns are worth the time to try and which ones I should leave to the truly sock-obsessed. 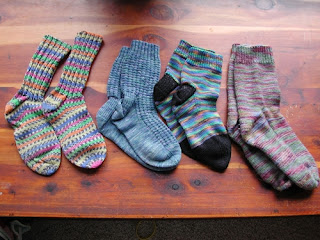 In the picture above are some of the first socks I ever made, starting circa 2002.  The fiesta striped Regia yarn was knit on size 3 double points, cuff down, and was my very first pair.  I still have them but they have been darned once and are not knit tightly enough to be super-comfy.  The blueberry waffle socks were an attempt to (over)compensate for the loose knit: I used bamboo size 0 needles and I will never use them again ... and not just because one of them snapped.  I don't remember which yarn I used (before Ravelry), but I still wear them regularly, though they also have been darned.  The third socks were made with yarn that I think was Knit Picks, but I only had one skein and had to buy black yarn from the fabric store to do the heels.  This may have been the pair I tried the 2 circular needles technique, which I've been using ever since.  I still have them and wear them.  Then there are the Socks That Rock in "Puck's Mischief."  Their fate was sad; they felted, but only after several wearings.  I decided after that that sometimes cheap sock yarn makes me happier than expensive sock yarn.  True disclosure: I'm not really willing to hand wash socks.  It might start well for a week or two, but it would never last in our house.﻿ 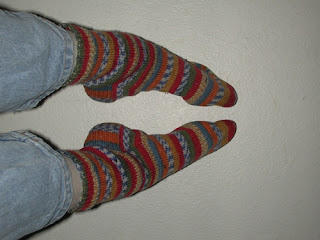 My heraldic socks are special.  I think this was also Knit Picks yarn.  I knit them in England, when Steve and I were on the bus touring with the GCC alumni Touring Choir in July of 2005.  I still wear them a lot.  They haven't needed darning yet. 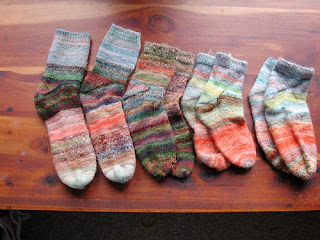 Sometime in 2007 I completed the mother-daughter sock project. This was with handspun superwash yarn.  Some of the socks were more successful than others.  It's always fun to knit with handspun, of course, but I didn't get the gauge right for all of them relative to the different feet I was knitting for.  Some are still being worn, but not often.  The girls' feet have grown since then! 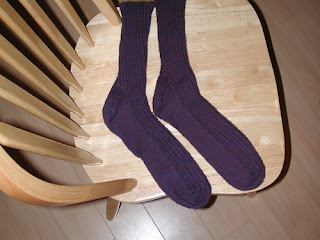 From 2008, these are the socks I knit for Steve in Knit Picks Essential Twist -- but they didn't felt, and he's still wearing them regularly.  I was really hoping for similar longevity with the pair I finished in January, but it wasn't to be.  Knit Picks is replacing the yarn that felted with some Stroll Tonal in "Kindling" -- I'm looking forward to working with it but will be a bit gun-shy with this brand for awhile.

I have more pictures of socks but these are the ones from farthest back in the archives.

My goal in 2013 is to knit plenty of socks for the members of my family that like and wear them frequently.  Ideally at least Steve and I will have enough socks to wear handknit socks every day of the week (I'm close, Steve needs a few more).  In fact, Steve has a cold right now and is trying the cold sock cure, which involves wearing wool socks over cold wet cotton socks overnight in the hopes that, I don't know, circulation will improve and the cold germs will flee through the soles of the feet?  Hey, it's worth a try.

Are handknit wool socks the key to health and happiness?  Well, they can't hurt.
Posted by Kathy at 8:17 PM

Email ThisBlogThis!Share to TwitterShare to FacebookShare to Pinterest
Labels: socks