I think I'm trying to do too much on Saturdays.   But then, that's nothing new.

Yesterday afternoon I spent wrestling with an Excel spreadsheet to figure out registration for all the students who will be doing the Latin Olympika.  I don't speak spreadsheet and I couldn't make it do exactly what I wanted, but Steve said it was a good spreadsheet anyway.

Cedar Tree Logic students put on a "teacher appreciation dinner" last night.  Steve was my date.  I felt very appreciated.  Afterwards we went to see Argo.  It was an excellent film, but very intense.  I should probably not try to knit socks on size zero needles while watching intense movies in the dark, especially when increasing for the gusset.

Quarta has to clean her hamster cage on Saturdays, so it's kind of fun to have Winky the hamster girl rolling around the downstairs of the house while we eat our breakfast on Saturday mornings.  It's wild how she freaks out the cats.

I noticed that the glass reflecting bowls on the lights in our bathroom hadn't been cleaned in many years, so I did it this morning.  I should really do that for all the other lights in the house.  I wish I could fix the lights that have shorted out, but I don't think I can do that.  We really need to hire someone to do that.

I pieced the backing for Easy Street, but I didn't get to put it on the frame yet.  I sewed about 6 more blocks for the crumbs quilt, and the sewing room is still a dreadful mess.

I graded some more Latin quizzes.  I am always amazed at how differently all of my students interact with the problems I set them.  Some with scary, mathematical precision; some as though the lights have not yet been switched on.

I took Tertia shopping to try to spend some of her Christmas money.  She looked at board games but didn't really see anything she liked and didn't already have.  We decided she doesn't need any more video games than the ones we have that she doesn't play, and she doesn't have enough money or real need for an ipod.  (I would like Quarta to help her learn how to play some of the video games and computer games that she would enjoy, but Quarta probably doesn't have enough patience.)  She looked at "jewelries" and liked some, but didn't buy it.  She bought a bubble see-through umbrella of her very own and we practiced putting it up and down in the store so she can do it herself.  She also bought a battery-operated hand-held fan that dispenses M&M's.  She still has some of her Christmas money left.  Maybe we'll work on taking her shopping more often, because it's kind of fun seeing how her mind works.  She resisted efforts from Quarta, who has already spent her Christmas money, to influence her to buy something that Quarta would like. 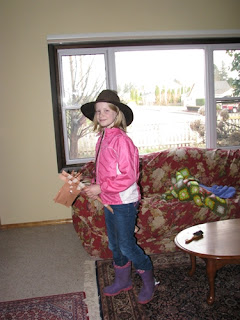 Quarta's class celebrated "Cowboy Day" a week ago.  She was probably the only one in purple boots, who made her own horse.
Tertia has now had two bowling matches.  In yesterday's, she bowled a 41.

After reading this article, I want to play a Civ IV game and conquer the world.  Aztecs? Zulu?  Mongols?  Something I haven't been much before, I think.
Posted by Kathy at 10:54 PM