The Joy of Finishing

So, I have progress in both knitting and quilting to report this week. Of all the things I have blogged about, the knitting and quilting have always been constants, and since I am still struggling with blogging regularly, it is easiest for me to push myself to blog when I have progress or even a finish to report. So, I started a new, impulsive summer knitting project this week. It is Gemini, from Knitty summer 2012 issue, and I am trying it with some reclaimed cotton yarn from an unraveled thrift store sweater. But my conscience nagged me as I knit, because Mint Chocolate was lacking only the buttonhole band and some buttons, and it had been started 5 1/2 years ago. 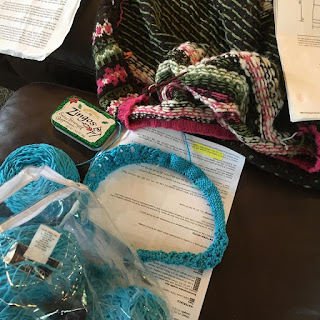 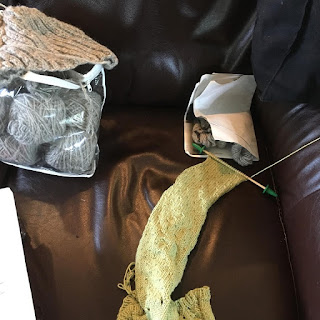 Also, full disclosure on my abundance of UFOs -- on the right is On Your Toes, a Green Mountain Spinnery pattern I started about 8 years ago (?) with some handspun Shetland wool. And on the right is Rosalind, also long in hibernation. Rosalind doesn't need too much more, On Your Toes needs quite a bit. 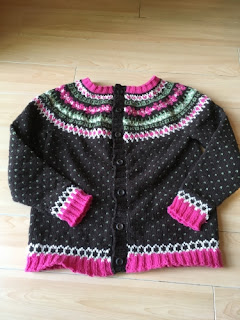 Well, I stayed up late and banged out that buttonhole band. It was just a little math, and looking up how to do one-row buttonholes. The next morning I sewed on all the buttons, which were salvaged from my favorite red Nordic sweater I bought at Goodwill, after it wore out at the sleeves many years ago. 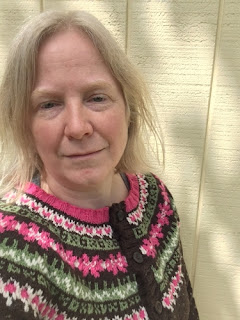 I even practiced my selfie-taking skills a bit. They are better than they used to be. Mint Chocolate, finished at last. 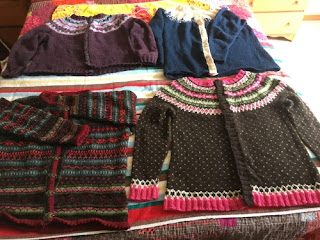 So after I blocked it, I also washed three other of my colorwork cardigans in the Kookaburra woolwash. And then I ordered some more Kookaburra because it's been too long and basically all my woolens need washing. Amazon delivered it the NEXT DAY, which is kind of insane but impressive. 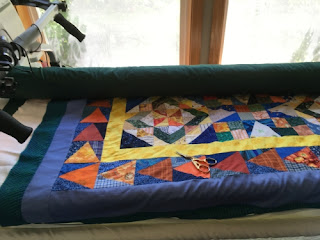 So last week I blogged about returning to the Megaquilter to work on Celtic Solstice, which had been basically waiting 1/3 done since the end of 2017. This was the 2013 mystery quilt. I got to the bottom border and had to refresh my memory about how the quilting goes. It was a good thing I had taken a picture over a year ago of the border quilting, which is a wave pattern. 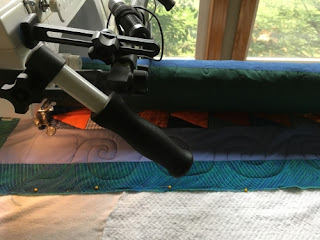 That was this morning when I finished the bottom border. 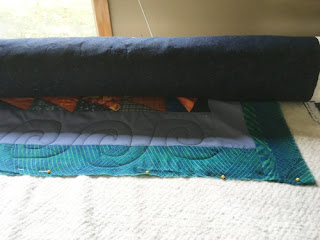 And the right side. Then I took it off the frame and remounted it so one side was ready to have the border quilted. When I took my training lesson on the Megaquilter, the lady said to do this with borders. You can just let the weight of the quilt hang over the front rail to keep a basic tension on the area to be quilted. 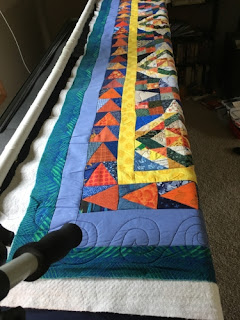 How it looked from the side before quilting... 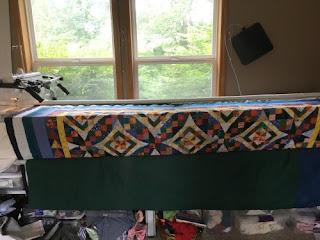 and from the front of the machine. I tucked the extra quilt under and up again over the batting rail to keep it out of the way while still holding tension. If necessary I put a heavy notebook in the middle, in the "pocket" formed by the folded quilt. Believe it or not, this helps!

So I have finished quilting Celtic Solstice. I am still having some trouble with the machine, but I think it is because the hard rubber rails on the carriage have abraded in certain spots, and maybe also because it needs me to use different thread. I can tell it's the rails by visual examination, and because the bumpiness I feel in quilting happens when I am quilting north-westerly or north-easterly. I think I can fix the rails on the carriage, cutting down the short rails that I have never used from the original set-up. I will need to disassemble the set-up and take the machine off separately from the stitch-regulator to do that, and I can maybe sew on the binding while I have it off to test whether the machine itself needs a tuneup. This is a lot of tech talk to say, I need to hold myself accountable to actually do that! It's a bit scary for me. But I am on a bit of a high from having actually finished a project, and maybe I can channel that. I have so many more tops to machine quilt!

So in summary, I have finished two long-standing UFOs in June so far. They are just NOT the ones chosen randomly from my list.