I have been spring cleaning a bit in my sewing area. It badly needed it, and has for a long time. In the way I allow myself when I am spring cleaning, I have also been getting distracted and working on new projects. More of that later. 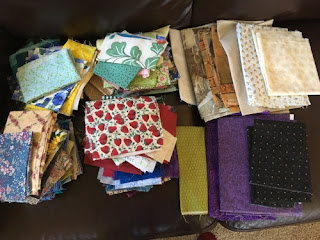 The intervention had to be done. Above is the new scrappy assorted stash I acquired from a 90-year-old lady down the street who was having a downsizing fabric sale. I know there are 90's fabrics in there and probably some older than that. My cupboards are already overflowing. 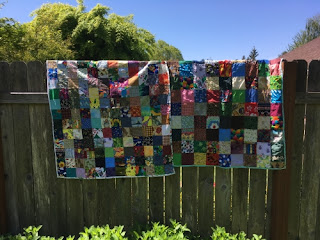 I finished two little baby blankies made of novelty fabrics in 4 and 5" squares. They are a layout of 12x14 for the 4" squares, and 9x10 for the 5" squares. I used no batting, quilted in the ditch and backed them with cozy flannel from Joann's, which I then folded to the front for the binding. I washed them in cold water afterwards. They can be played on, wrapped up in and snuggled with until they become rags, as is proper with baby blankies. I should allow 1 1/3 yards of flannel for the backing in the future. 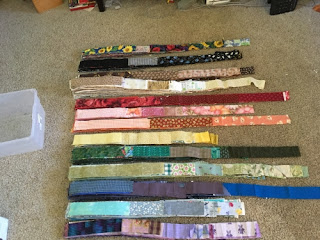 Bonnie Hunter has a great Scrap User's System that I have been gradually converting most of my smaller cuts of fabric to over the last several years of making her mystery quilts. But when you work with a quilt like the Good Fortune mystery that uses every single size of strips, you end up with a bit of a mess to clean up, and added to that, I have been cutting down scraps into strips for several months. So I took a Saturday and organized them all. Above are my 2" strips in rainbow order. I have a category I am calling MODs - Multi, Outlier and Disputed fabrics that you're not sure what color they should be filed under, or they push the boundary of what is "true" color, or I dispute with myself where they should be. Those are at the top, with blacks, browns and neutrals, and then the other colors. 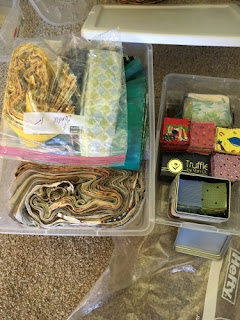 Here they are, neatly rolled into oblong groups, and some are bagged. There is a separate box for 2" squares and 2x3.5" bricks. The genius of this system is that if you have done all this precutting, which is fun in itself for someone like me anyway, the moment that inspiration strikes you can simply go to your box of strips and pull out the colors you need to start sewing. And when you're done, there is a system for storing it neatly and mostly out of sight. 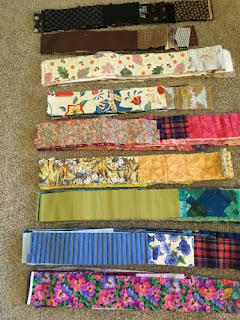 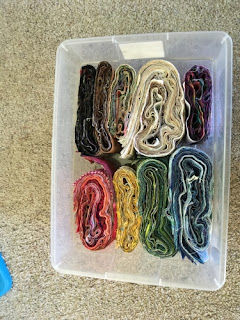 There aren't as many of them, but I followed the Marie Kondo method for displaying them on end, so it sparks joy. 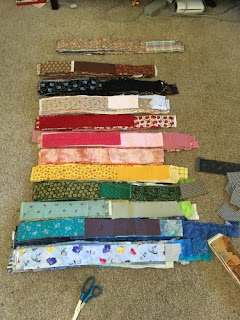 These are the 2.5" strips, during and after. Sorting them brought back a memory of the 3 Scrappy Trip Around the World blocks I made back in 2013. So this was just the first time I sorted them, and the second time resulted in pulling enough 16" long strips to make an entire quilt. 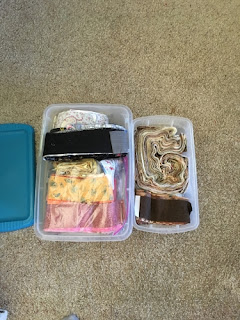 I also sorted the 1.5" strips, but I'm not sure I photographed them, because I was getting tired by that time. The bottom line, though, is that a little time spent organizing your fabric into strips, and sometimes squares and bricks, pays off big time when you want to start a quilt on the spur of the moment. 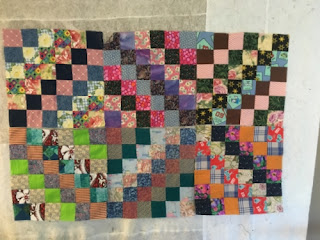 So here are the six-year-old Scrappy Trip Around blocks combined with three more. I'm working on about #30 now of the 48 I want. More pictures next time.