Spring Break had a different feel to it this year. Steve kept working, Quarta went to Mexico on a work trip with Cedar Tree, and Emma stayed home with me. We did a few small things around the house, went swimming at the community center once and signed her up for her pass card to swim more for free, but were mostly pretty lazy. I did go to the Quiltfest Northwest, put on by the Clark County Quilters, held at the fairgrounds. 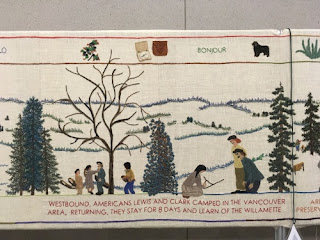 There is a Vancouver Tapestry, which is really long so it isn't displayed that often. I had never seen it before, but it depicts in beautiful wool-on-linen embroidery the history of Clark County. 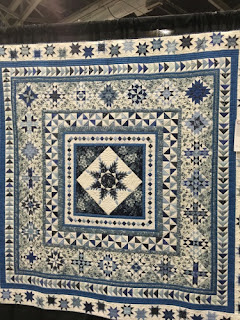 This was probably my favorite of the quilts displayed, and I could imagine being able to make it myself. One of the themes was blue and white quilts. 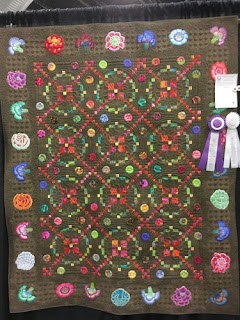 This one went wild with Kaffe Fassett fabrics. 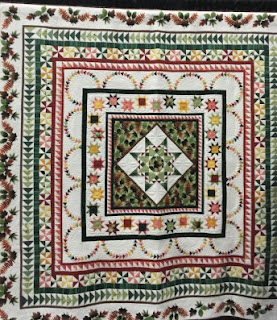 The work on this was stunning. It reminded me a little of my tree quilt, but the little flying geese circles in the middle border would be incredibly difficult. 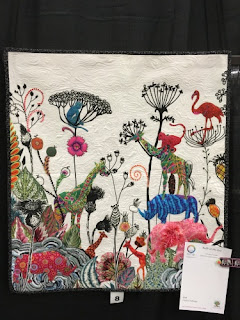 Another one with a strong Kaffe influence. 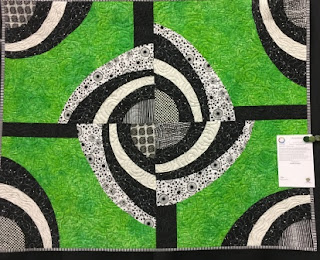 There were several city and traffic-themed quilts, which I captured for my civil engineer husband. This one is "roundabout." 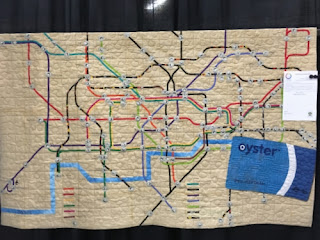 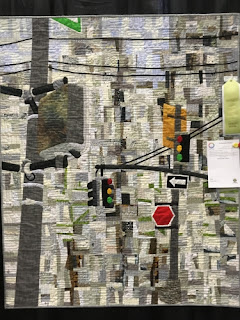 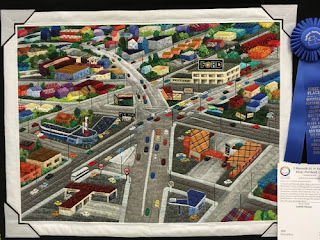 and an actual intersection in Portland.

The show was very nicely organized and I enjoyed it a great deal. One of these years I should finish all my unquilted tops.

The three of us who were home went one day to the Oregon Historical Society museum. It depicts the history of the Northwest but mostly Oregon, from a woke intersectional perspective. So you learn about the history of the Northwest from the perspective of all the people who might have felt marginalized by their treatment at the time: early African-American settlers, gays, women, Native Americans, Hispanics, and immigrants. But the Whitman missionaries were, it is strongly implied, probably responsible for their own massacre because of their insensitivity, or something. 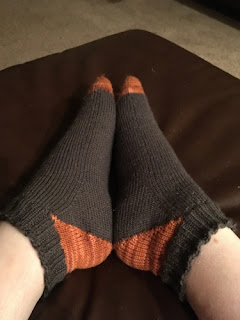 I finished the second sock of Grellow Love by Clare Devine. The first counted toward the Lots Of Socks knitalong for World Down Syndrome Day, but the second did not. It is a fun and easy pattern to knit and I will probably use this heel in other socks. 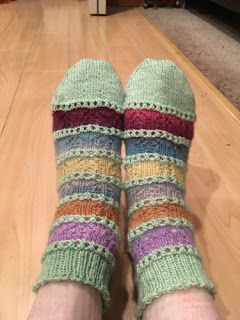 Likewise I finished the second sock of Flower Shock by Anna Friberg.  I discovered that the mystery green yarn is Hazel Knits; the contrasting color bands are all different segments of two colorways of Knit Picks Chroma fingering. They are very pretty socks, although I wonder how practical because of the Chroma, which is not going to be very hard wearing. And it was Anna, known as Yarnesty, who informed me I had won two free patterns from her collection as a prize in the knitalong! So I checked her patterns on Ravelry and chose the Fergus socks and the Bjorko shawl. I look forward to knitting them soon... and maybe going shopping for more yarn! I'm adding to my queue faster than I'm getting projects done, but I've always enjoyed having an extensive queue.

Quarta returned from Mexico with an injured knee which required a doctor visit today and will need an orthopedist check tomorrow. The kneecap briefly dislocated and then popped back in place, which she may just be more prone to because it happened once to her other knee. This time there is more swelling but we don't think any permanent damage. We'll see. Spring is really getting into gear and we have lots of pretty flowers, which I may share next time I blog.