Randomday and a finished quilt top

Oh, I have missed Randomday! During my long blog hiatus I would often think of a humorous event or observation and wish to share it on my Saturday posts, which I then never got around to making. 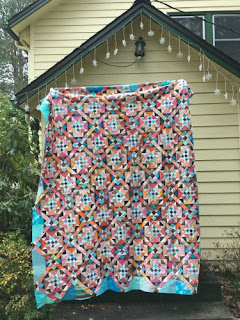 The impetus for starting up blogging is also the impetus for finishing a project left over from early this year, which had languished largely untouched since January. This is the quilt top for On Ringo Lake, last year's Quiltville mystery. There was a lot of seaming to do, and it was all on the diagonal. which meant it had to stay on the family room floor from the time I laid it down (Tuesday night?) until I finished it late last night. There were periodic times when I had to rearrange some of those tiny pieces because the cat messed them up.

Thanks to Steve for holding the quilt up away from the wet so I could get a photo of it in daylight. 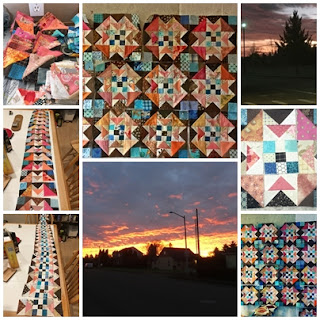 This is a collage from last winter when I was working on it. My new version of Photoscape can probably do collages, but I haven't figured that out yet. I just love how the colors of this quilt mimic a sunrise on the rippling waters of a lake. Finishing this quilt top (not getting it quilted, that's another hurdle for another time) was my requirement of myself to participate in the new mystery quilt. Which I am doing, and it is fun. I have been dealing with my photo storage on my phone, and getting ominous messages like "your iCloud storage is almost full." One technical challenge at a time, but I was able to go back today and delete a bunch of these process photos from my phone. They have served their purpose. But whenever I look at this quilt I'll remember early morning walks with Emma to school last year, and all the beautiful sunrises we saw together. 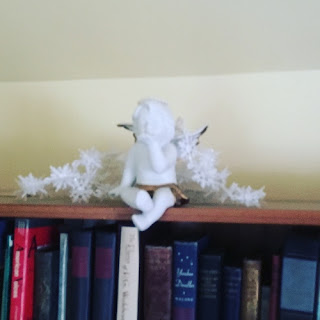 The tree is up but only partly decorated. The local elves are teenagers and either have better things to do or a short attention span. I put up the cherub in the snow cloud on the shelf, which I think is much nicer than the creepy "elf on the shelf" and anyway, I've been doing this since before I ever heard of that weird trend. 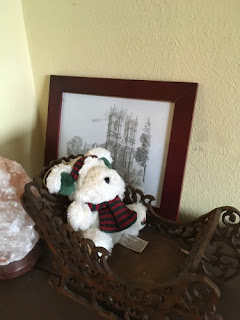 We've had a Christmas bear in the scrollwork sleigh every year since the boys were little, although it wasn't always this bear.

I loved all the coverage of the state funeral this week. It felt refreshing to have something on television that drew us together for a time instead of trying to divide.

Last night I made a recipe from the Redwall Cookbook, "Mole's favorite deeper 'n ever turnip 'n tater 'n beetroot pie." This may be my only autographed cookbook; yes, Brian Jacques himself signed it. There are several good recipes in it. This one is kind of like a vegetarian shepherd's pie, with mashed turnips and carrots layered with mashed potatoes, and cheese on top. The beets are pickled, served on the side along with a crisp salad. Other recipes we have liked from this book include "Shrimp and hotroot soup" and "Roast roots and baked spuds."

We went to a pancake breakfast and silent auction for the Sheriff's department explorer program this morning, which a friend of Quarta's participates in. Steve won a basket that included a gift certificate for Home Depot, which we have already spent.

Tomorrow dinner will probably be Apricot Chicken, a recipe I discovered in the early 90's. You mix an envelope of onion soup mix, and about a cup each of Catalina dressing and apricot jam, and you pour it over chicken, and then bake it and serve with rice. You can do the same thing only substitute cranberry sauce for the apricot jam, and it's Cranberry chicken, which is also good.

And that's it for this re-inauguration of Randomday.
Posted by Kathy at 5:40 PM