Well, I am in the process of coming back to my blog after months of neglect, and it is in large part thanks to the Good Fortune Mystery Quilt. Every year, scrappy quilters all over the world start stitching the day after Thanksgiving on the clues released by Bonnie Hunter of Quiltville. The first gathering of photos from the first clue can be found here at Bonnie's site. You can also download the first clue, but be sure to keep checking back for all the clues because they will go away after the Holiday mystery season is over! 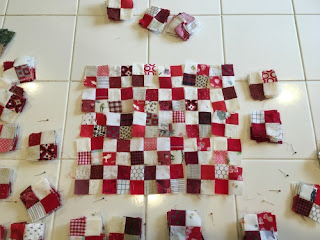 I'm happy to report that I finished all the pieces for the first clue this morning. Or did I? I know I'm going to be changing up the colors somewhat, and I think I'm going to substitute blue for orange. But the little four-patches were so cute, I couldn't resist making a few in blue instead of red. 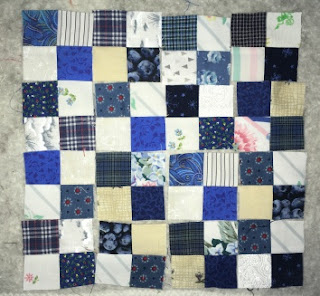 And even a few in green. 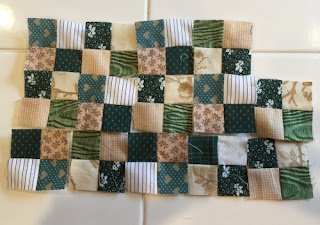 I really like the checkerboard effect, so I think having a bunch of extras of these in various colors isn't such a bad thing. Especially since I haven't made a definite plan for the color scheme. 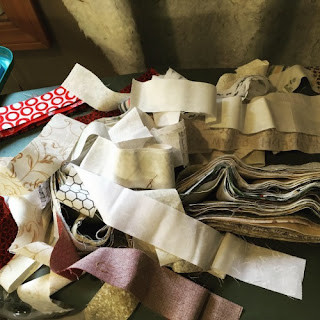 It's a messy process: I was able to get right into it, though, because I had my boxes of strips in different colors and widths already cut. This is thanks to Bonnie's scrap user system, which is something I've been converting my stash to over the last several years of mysteries. When the clue came out, all I needed to do was open the box that contained strips in the width called for, and get out the neutrals and reds (and blues, and greens). Instant gratification sewing, very little extra cutting needed. But the tradeoff is the family room is a bit messy and the cat wants to sleep on the pile of neutral strips I haven't used yet. 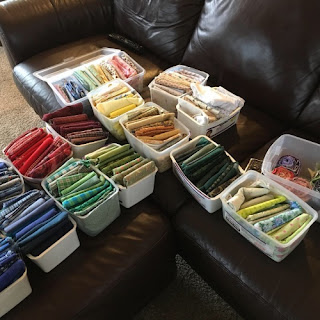 Um, yeah, I should probably put those back in the cupboard. Lots of old fabrics being used up, and no new fabrics bought so far. I do think my reds are a little low, and yellows as well. I'm probably going to use yellow in the place where the green goes, and green where the blue goes, and blue where the orange goes, and keep the red where it is.

Oh yes, I am also trying to make myself finish up On Ringo Lake from last year. I cut the setting squares and triangles called for in the final clue. Next comes the assembly. also a somewhat messy process. The mess just seems be a part of quilting. Maybe if I actually finished more projects and stuck with them. Well, it does feel good to be back in the quilting area. I will try to dig myself out of the piles of WIPs.
Posted by Kathy at 2:32 PM

You look very organised, with all those containers of sorted fabrics. And all your variously-coloured 4-patches look great!

It's going to be a great quilt whatever color you choose. Nice to see all your fabrics in those boxes.