Sunday was a snow/ice day. Church services were cancelled and we looked up one of my Dad's recent sermons on sermonaudio and had church in the living room. Monday was another 2 hour late start; today was a regular start day but Quarta had 2-hour early release. I had heard there was more snow coming so I did my run to Winco to buy supplies for the Last Noel... which is this Friday!

I browned the 10 pounds of ground beef I bought with some onions and celery and put it in the freezer for sloppy joes. I have all the supplies for punch and hot cider and Quarta and I have been baking cookies. So far there are frosted cut-outs, rosemary-walnut biscotti, chocolate-covered peanut butter balls (they would be buckeyes but they were fully immersed in chocolate), and another batch of fudge to replace what is almost gone now. Today I also made a big batch of granola.

The bad news... Peter's car, which was in an accident on the 1st, is now considered a total loss. I wish it hadn't taken so long to come to that conclusion, but oh well. That means he'll have to come home this weekend, return his rental and get a "new" car... but he might be here for the Last Noel, which would at least be some consolation. He's had a rough start to the year and the weather on his side of the state is at least as bad as here. 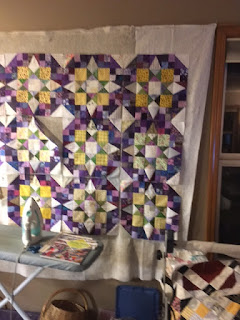 These are some of the first photos I've taken on my new iPhone. Here you can see Allietare in the bottom right corner, and 11 blocks on the design wall. Progress on En Provence is continuing slowly. I can get one or two blocks pieced per day if I clear some serious sewing time, maybe more. I haven't had any serious sewing time today! 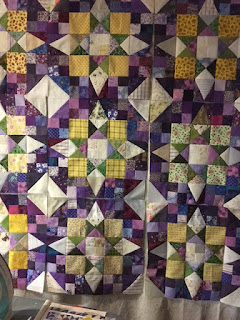 I'm liking the  pattern as it develops but I don't have any of the sashing laid out yet to see the overall pattern. I've discovered I prefer it if I trim the patches before joining them, but that takes longer. I'm not in a hurry though. I'm going to go ahead and post the link to the link-up at the Quiltville blog. I'm always amazed at how many people get their entire top finished, and quite a few have it quilted. I like my variety of yellows and purples and hope they make the quilt sparkle. 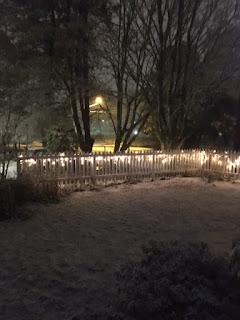 Now there's reason to hope/fear (pick one) that school will be cancelled tomorrow... over an inch and still coming down thickly. I don't think we've ever had so many snow days since moving here... the poor kids will be in school almost through June. Sure is pretty, and no ice rain so far. So here's the deal: I worked hard today so that, whether tomorrow is a snow day or not, I am determined to sew for about 2 episodes worth of Call the Midwife. I'm hoping it works. Then maybe I'll get to the point where I can start the sashing.
Posted by Kathy at 8:35 PM

I'm sure your quilt will sparkle once you get it all together. Hope you get your 2 episodes of sewing done as planned!