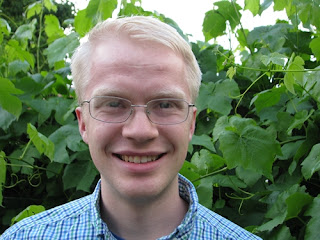 Daniel's 22nd birthday is today. And he just graduated from college, and he's getting ready to head out to Washington D.C. and the Capital Fellows Program in September. We're pretty excited for him, and proud of all he's accomplished. If you're in town this weekend, there's an open house at our house from 2-5 on Saturday.

Following tradition of the last few years, Daniel grilled for his own birthday; today it was chicken in an apricot/honey marinade and salmon in a citrus and chili marinade; grilled asparagus and grilled corn on the cob. I did potato salad and a blackberry pie for dessert. It was all very nice. 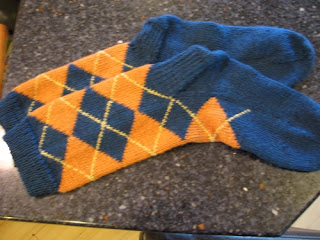 The argyles are finished and were presented. By this time it was not a surprise, other than the fact that I finally finished them! We also bought him a pair of  Chaco sandals, which he requested and I drove to three different Portland shoe stores looking for on Saturday. It was an adventure. I aspire to be hip enough to shop for shoes in Portland on a regular basis.

Other exciting events of today: a raccoon was hanging around early this morning when Steve left for work, sniffing around Smudge's food bowl, which was empty at that point. He returned in broad daylight today when Daniel was on the back deck, and when I came along and growled at him to move along, he did not display what I thought would be the proper respect for humans... he bared his teeth at me and did not retreat. I ended up turning the hose on him and he climbed a birch tree, and there he stayed for the rest of the day, grooming his paws and taking over what I think was a jay's nest to nap in. He is the uppermost of the two dark blobs in this photo. Stay tuned. I'm hoping he moves along without the confrontations becoming a daily event. The bared teeth were a little creepy. 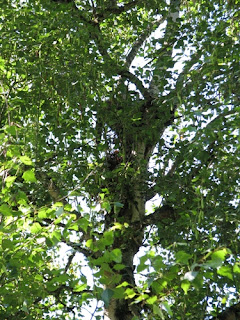 I really need to get cleaning for the party Saturday. 16 years of Latin books and files are still spread out over the living room floor. They are gradually getting sorted and somehow I'll find room to store them. I still feel like I need to have a big retrospective post about my years of teaching, but it's all still too exhausting to think about. I'll settle for clean enough, and process later. In my mother's Latin for Americans test booklet, which I've had for over a decade, I found a mimeo copy of a letter she wrote to friends in 1968, when I was 9 months old and we were living in the Netherlands. It was a beautiful treasure that I don't remember ever reading or knowing about before... maybe I'll scan or type it in to share here in the future.
Posted by Kathy at 10:20 PM