Dinner for the Ides of March 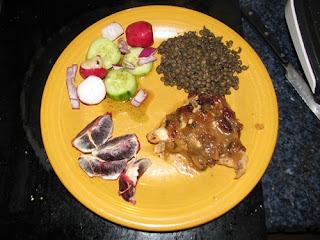 The Republic may be crumbling, but we're going to eat well.  How else to celebrate the Ides of March but with an ancient Roman dinner, in the style of Apicius? We have here Parthian Chicken, or a modernized version of it, with Lovage and Cumin sauce.  Lentils with mint and coriander, and a salad with a dressing that could be Roman.  And blood oranges, of course; as Quarta pointed out, very appropriate for the Ides of March.

I freely adapted various recipes based on Apicius for the chicken; I made a sauce with sauteed onions in olive oil, sweet wine, garum (fish sauce), honey, ground dried plums and raisins, chopped green lovage and toasted ground cumin and caraway seeds.  I slightly pureed the sauce with an immersion blender - I wonder if that's ever been done in ancient Roman cuisine before? I salted and peppered the chicken and poured the sauce on top, then baked it at 375 for about an hour, covered for the first half and then uncovered.  The combination of lovage and cumin is distinctly Roman and the sweetness of the sauce evens out some of the unfamiliar flavor combinations in a very nice way, I think.

The lentils were cooked first, then I added chopped parsley, mint, and cilantro, ground coriander, garum, vinegar, honey and salt and pepper.  It's a bit like Indian Dal, if you've had that, but with a sweeter flavor.

Email ThisBlogThis!Share to TwitterShare to FacebookShare to Pinterest
Labels: decline and fall of a great civilization, Ides of March, Roman Empire