This and That, some Knitting, and a Stash Update

A certain 16-year-old got her first rose from a boy at school for Valentine's day.  Classy! And maybe a bit disconcerting for her mom and dad.  She also has permission from the orthodontist not to wear her retainer during the school day, just evenings and overnight.  This is a little harder than when she had to wear it all the time, because now she's had that taste of freedom, and realizes it's so much easier to talk, sing, and eat without it.  Speaking of singing, her choir participated in the annual district choir concert over a week ago, and it was lovely. I especially liked "Turn the World Around." 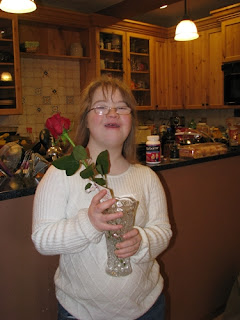 It seems to be either quilting or knitting, not both, for me lately. I started some new socks: I finished an old dishcloth: 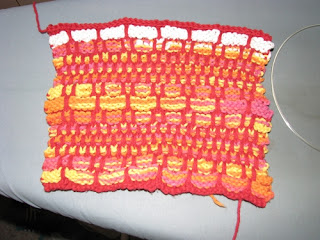 And I started some other new socks: 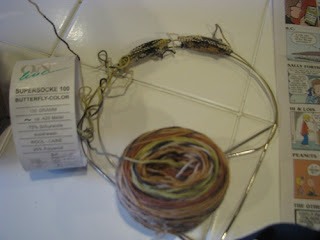 No quilting has happened during this time.  But I decided to update my occasional stash report to reflect the knitting progress:

In other news, the February crud has struck school and I've been fighting off headache, muscle aches, chills and sore throat all week.  This may be why knitting has had such strong appeal.  Yesterday I went to bed after dinner, listened to an audiobook and knit for awhile before sleeping from about 8:30 until 5:00 this morning.  I am listening to third of the Wheel of Time series by Robert Jordan... the audiobook means I miss a lot but it keeps it moving along for me whether I miss something or not, and I think I am hooked on the story now at last.  I am supposed to be writing Certamen questions for the Latin Olympika we are hosting in 2 weeks... yikes! But that has not been happening very fast this week.  With the current state of my laptop (unable to unplug because of battery and charging port issues) I have been doing more of my writing longhand.  I don't think that makes me more productive, but there is a part of me that enjoys having actual paper and ink notes.  But then there's the clutter problem.

I volunteered to take a current events survey on the phone the other day; I think I was a good subject because I remembered who was head of state of Germany (Angela Merkel) and I think I sounded more knowledgeable than the average American on those videos that sometimes show up on late-night shows about politics and foreign policy. Anyway, the caller thanked me profusely for being her first subject of the evening and even called me "hon", so it was time well-spent.

This sounds like a Randomday post, but I'll try to do that tomorrow.
Posted by Kathy at 3:53 PM