Whatever happened to children's lit? 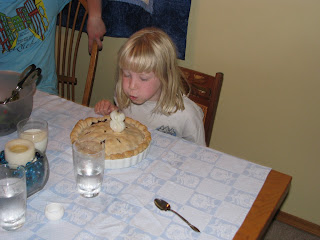 My favorite 3rd grader is quite the reader.  My challenge is to make sure what she reads is, if not worthwhile and "improving" in the Victorian sense, at least not actively harmful.  That seems to be harder than it was with my oldest.  This one has been through the Boxcar Children (several times), goes through the fairy books (like this set: The Jewel Fairies) by the dozens, and likes to listen to audiobooks that she gets from the library -- over and over again, until the tape player breaks, regardless of literary merit.  She goes to a classical school where I can rest easy she will read good books, and she has read the Little House books, Narnia, and as far as I will let her in Harry Potter (that's the first 2 books for now).  She likes her comfort zone, I guess.  I've started intercepting some of the books she gets out of the library these days.  Friends ForNever - Summer Camp Secrets struck me as training wheels for the growing genre of mean-girl Young Adult chick-lit.  I didn't read it all through, but at the very least, it has way TMI for my 8-year-old, mostly relating to complicated blended family relationships and gossip and hurt feelings.  Horrid Henry Tricks the Tooth Fairy slipped under my radar, probably because of the Fairy in the title.  I've rejected Judy Blume just for being Judy Blume, and issued a ban from henceforth on the Bailey School Kids series.  The Junie B. Jones series has a free pass for now because it's her older sister's current favorite, but she herself has outgrown it (thankfully!).  There are probably others I'm missing, but from now on I'm resolved to allow her to read only challenging, age-appropriate, mostly-harmless books. Yep, Censors 'R Us, and proud of it.

Here's what I'd like her to work on: Rebecca of Sunnybrook Farm, Nancy Drew, some of the Little House spinoff books, more of the Warriors series; and of course, the wonderful Brian Jacques Redwall series.  And I've got a whole tall shelf full of other classic children's literature when she finishes those.  If she reads a couple dozen of the American Girls doll tie-ins, I can at least live with that.  And maybe require another read-through for Narnia.  You can never have too much Narnia.
Posted by Kathy at 7:21 PM