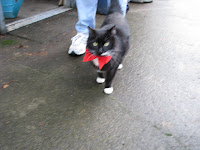 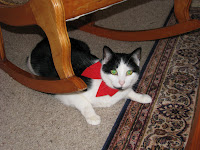 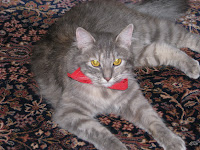 The holiday season being almost over by anyone's reckoning, I didn't want to lose the opportunity to document one of my most challenging decorating jobs, ever.

That's Smudge on the left. He's a tuxedo cat with a smudge of white on his chin, big on lovability and very poorly-endowed in the brains department. Nickname: Thunderpurr. Sadly, Smudge is a many-times repeat offender against litterbox protocol, and is serving out his sentence as an exile in the backyard, or occasionally a fugitive from justice in the basement. He never strays far from our door, spending most of the time in his hidey-hole in the window well or underneath the deck.

Bilbo is his brother and generally the more dominant of the two. He goes outside most nights and we frequently wish we could fit him with a cat-cam, just to see what he does. Nickname: Fleabait.

Muffball was a stray kitten our neighbors found last spring, and we do call her Muffin when we take her to the vet. She shows promise, that one. Not a morning goes past that she hasn't dug a new ball of yarn out from somewhere in the depths of my stash and left it for us to find and admire her hunting prowess. She's a bit skittish, but occasionally consents to being captured and cuddled. Of all the cats, she showed the most ingenuity in the futile attempt to remove the bow.

I relented the day after Christmas, and removed the bows myself.
Posted by Kathy at 2:40 PM