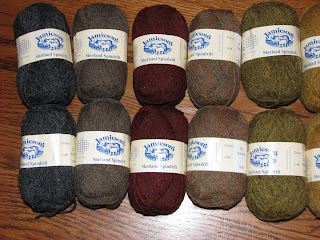 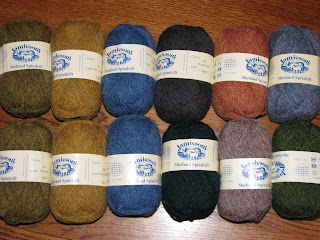 So I have been doing a lot of stranded colorwork knitting, and I've been reading about even more challenging and beautiful patterns than the ones I've attempted so far, and the local yarn store, StitchCraft, is closing and offering a 30% discount. So it was only natural, I suppose, that I would be drawn to these lovely Shetland yarns, suitable for fine Fair Isle knitting. I'm contemplating the possibility of designing my own pattern.

Left to right, there are 2 (25 gram) skeins each of Jamieson's Shetland Spindrift in Oxford, Seaweed, Sunrise, Autumn, Bracken, Yellow Ochre, Clyde Blue. And 1 skein each of Rosewood, Pine Forest, Nutmeg, Thistledown, Twilight, and Moss. It wants to be knit up into a cardigan, I think (I love cardigans) on #2 or #3 needles. It has been awhile since I bought new yarn and it makes sense to own some of this for the kind of knitting I'm wanting to do. Pricewise, I came in at just under $100 (including some buttons I bought as well.) I have enough to do something creative, but of course depending on what pattern I eventually choose I may need more of some colors.
Posted by Kathy at 2:20 PM