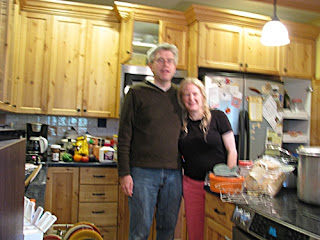 Today is Steve and my 23rd anniversary.  Our kitchen is messy and the photo is a bit blurry... it was taken by Tertia... 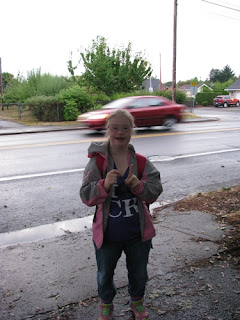 ...who is here holding up her fingers for the first day of 10th grade, which was this week.

Steve and I celebrated yesterday by going to the Parade of Homes and looking at the fancy houses, and then eating at a nice restaurant, and then watching The Man from U.N.C.L.E.  Then we came home and Steve read a chapter of history about the reconquest of Constantinople, and I fell asleep.  All I really remember was the Despotate of Epirus.  It might be nice to be the Despot of Epirus.  Today was quiet, and that was nice too.  I picked grapes and avoided doing anything remotely challenging with my brain, and we went on 2 walks, one where we came back early because it started raining on us, and one real walk.  Quarta made mac and cheese with hot dogs, peas, and olives for our dinner and later we'll have ice cream and watch a movie.

A tale of three couples... at the Grant House restaurant last night, the nice young waitress who served us asked if we were celebrating anything special, and we said our anniversary.  She mentioned that there were several couples in the restaurant doing the same thing, and asked how many years.  When we said 23, the lady of the nice older couple seated diagonally from us said something about how we'd need to have 26 more years to catch up with them!  So that was truly sweet and heartwarming. We ordered, I visited the restroom, and when I came back there was a new couple seated diagonally behind me.  Steve and I talked animatedly and enjoyed ourselves, the older couple were talking sweetly to each other and enjoying themselves, and somewhere over my shoulder I felt a chill. Hard to explain, but I suddenly had second thoughts about laughing or talking with any warmth. Couple #3 was maybe midway between 23 and 49 (no idea if they were celebrating anything but it sure didn't seem like it), and the gentleman was not going to be pleased.  The wine was not good enough (we found out afterwards it was a $30 bottle) and while the wait staff was giving them a chance to find an alternative, he complained about the inexperienced server (who was new on the job but not unsupervised) to the older couple, and stormed out, with his wife trailing after him and saying, "We won't be staying." It upset the kind older lady, you could tell, and before that couple left, she came over to me and put her hand on my shoulder and blessed me for many more years of happy marriage... and of course I responded in kind.  She said her husband's parents lived to celebrate their 70th!  And so I am left with the real hope to be like that quirky but kind old lady in 26 more years, and we all had a bit of a shudder at how nasty it must be to be that impossible-to-please couple.  I felt particularly bad for the waitress.  She asked me a couple times if they said anything about her, and you could tell it bothered her, and she apologized for us having to witness it as if it was her fault.  I did my best to reassure her that he was probably someone who bullied everyone, and it made an interesting floor show.  I haven't seen someone who appears to be old enough to know better act so badly to a young person in a long time.

So the motto for this Randomday post is, be polite to the people who serve your food at a nice restaurant, and the fellow diners, and don't leave a bad taste in everyone's mouth.

Our food was delicious, by the way.  I had a filet steak with blackberry demi-glace, and Steve had salmon on a tomato coulis with blueberry compote, and we split a flourless chocolate mint torte for dessert, and it was good.  So is marriage, and here's to many more years.
Posted by Kathy at 7:56 PM